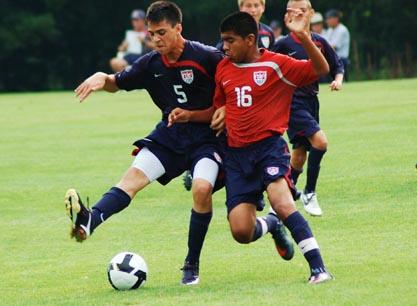 CONCORD, MASSACHUSETTS – Everyone knows that there’s nothing like being in the pool on a hot summer day. The concept was even truer than normal when applied to some soccer fields here Wednesday.

(Scroll down for match details and lineups)

Wednesday marked the first day of pool play in the U14 Boys National Team ID Camp at Middlesex Prep School. Head Coach Manny Schellscheidt and his staff put the top 44 players in a match of their own, while the remainder of the 120 total players at the camp continued to have the rule run over them as well in side matches.

Schellscheidt and his staff emphasize that everyone at the camp still has the chance to impress, and there were good efforts shown during all three matches played Wednesday, but the quality of the group starts to flesh out a bit over the course of the week and the play in the pool match does end up being rather positively distinct. 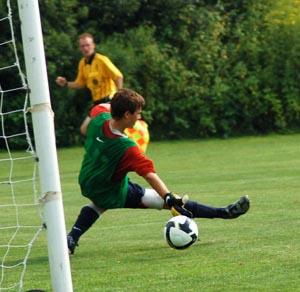 A keeper makes a save in Concord, Mass.
U.S. Soccer Staff Coach Rene Miramontes is working here again this year, and his answer to my question on what was the main distinguishing factor between those selected on a given day might surprise you.

“The biggest thing is personality. All the players have some definitely tools they bring, and some are better than others, but at the end of the day it’s personality,” Miramontes told me after matches concluded Wednesday. “Can they jump in there and grab the game and force the coaches to take a look at them.”

The veteran West Coast coach also said it isn’t necessarily that important how well each player plays with certain other players, but how adaptable they show themselves to be on the soccer field.

“It depends on what Manny wants to get out of the camp, but he’s looking for soccer players,” he said. “He’s looking for players who can adapt to different lineups and different situations. So whether they can play with this player or that player really doesn’t matter because in the end they may end up playing with a whole different group. It’s just a question of: Are they good soccer players? Can they impose themselves on the game? Are they at ease at the next level?”

The refereeing camp that US Soccer is holding here is also designed to help groom better officials for the game at platforms such as the US Soccer Development Academy. Miramontes believes the emphasis there is striking the right balance.

“U.S. Soccer’s refereeing department begins to identify potential referees who want to go on with their careers, and they try to groom them and expose them to situations such as this one that will allow the player to express himself but at the same time be protected and be able to play within the rigors of the game,” he said. “That’s for the big guys as well as the little guys. Refereeing in the Academy is by invitation, and within that there is proper supervision and training. You’ll see a new generation of referees coming through and I think they are doing it right.”

This match started a bit tentatively, with a lot of the play taking place in midfield. Vardar’s Matthew Nance already looks like an accomplished defender. He is good in the air and times his challenges well. Minnesota Thunder player Toby Khounviseth works hard in the middle of the field to win balls. San Juan Lightning defender Esteban Reyes also looked good in the back, with good positioning and good tackling technique. Mustang SC goalkeeper Andrew Ferber made a great reflex save from a scramble in front of net to keep the match scoreless going to halftime.

In the 2nd half, New York SC’s Alex Tejera draw a foul in the area for a penalty, and PDA forward Brandon Tetro took the spot kick well for a 1-0 lead. CASL’s Michael Clemmons tied the score with an excellent 1st-time strike on a nice pass from fellow North Carolinian Lawrence Taiwo. Taiwo went from provider to scorer on the winning goal, latching onto a great pass from Santa Barbara SC’s John Requejo and finishing well to make the final score 2-1. FC Westchester goalkeeper Gianni Carillo made a great save late to deny Requejo a goal of his own.

GSA’s DeAndre Robinson and Highland FC’s Austin Stamey each scored twice to follow a brilliant opener from Cobb FC forward Dembakwi Yomba as the southeastern side rolled to a big win. Weston FC’s Reynaldo Cevallos put in a hard-working shift in midfield while Miami FC Kendall’s Arthur Paterson was good both offensively and defensively as a midfielder. Plant City, Florida’s Omar Castro showed good awareness and technique as a defender.

The westerners put on another show, with Alejandro Segova of Westside Metros and Ricardo Ruiz of Fullerton Rangers looking especially impressive in a four-goal first half