ZAREPHATH, New Jersey – Seeing as how it is, after all, their club name in the tournament marquee, PDA takes a certain amount of pride in competing in this weekend’s ECNL event.

As if the PDA Invitational Girls College Showcase wasn’t weighty enough on its own, the New Jersey club has to worry about showing well on its own turf.

Well, it’s so far so good for the U15s who exorcised any anxiety they had in a 7-1 pounding of the Irvine Strikers on Saturday.

In a win that was much needed for a variety of reasons, PDA strutted like it owned the place. 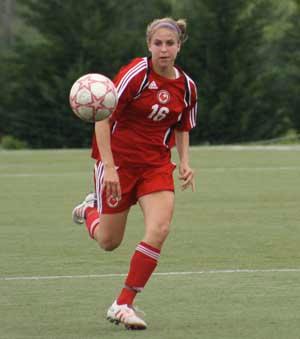 ECNL Saturday action
And well, I guess it does.

“We were in a slump coming here and we just said ‘this is our home turf and we’re going to bring it and win this weekend,’ ” said goalkeeper Danielle Sedillo, who barely broke a sweat. “Playing here motivates us and makes us excited to play. We won this (event) in PKs last year and we’d like to do it again.”

The PDA U15s certainly put themselves in good position, finishing the day in a tie for first in the Challenge A Division along with Arsenal FC – fittingly the two teams will face off today.

PDA began the game with purpose against an overmatched Irvine team.

Striker Andrea Fontanetta and midfielder Catrina Atanda controlled the action up front from the start; Fontanetta, with her slippery runs and dribbling magic, and Atanda with her decisiveness once she gets the ball in good position.

PDA earned a penalty kick after the Strikers committed a handball in the box, and Atanda quickly converted for the lead. Not more than a minute later, Atanda fired a blast that glanced off the crossbar and was cleaned up for a score by Alexandra Schlobohm.

And the rout was on.

With it being the last ECNL event before nationals in July, this weekend’s action will have major implications for everyone and could serve a greater purpose for PDA than simply being a home game.

“It’s big picture for us. We need to make sure we have a good showing not only at our event but wherever it’s going to be,” said U15 PDA coach Seth Korman. “We’re worried about the league standings. We had a good showing at (in Dec.-Jan) Disney and a not so good one in Vegas (in March). Today I thought we came out played well after a rough last weekend and we played a good 80 minutes of soccer.”