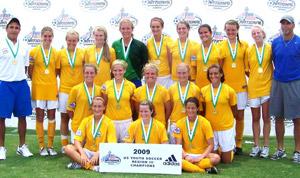 Florida powerhouse Ponte Vedra Storm.
The TeamRank National Championship is a unique rankings setup that only includes team performance from the current season. It begins with events in August and ends with final events in July, at which point a new competition begins and the slate is again wiped clean. Each ranking is only for that August to July season.

The Rocky Mountains & Southwest Players To Watch ranking update features  a number of youth national team veterans including Cate Parchinski, Lindsey Horan, Gabrielle Miranda and Lauren Kaskie on the Girls side, and Dillon Serna, Cole Nagy and Riggs Lennon with the Boys.

In the Florida TeamRank update, early returns show West Pines United (U15), Florida Rush (U17) and HC United (U16 & U18) among leaders on the Boys side. In the Girls standings, the memorably named Rockledge SC Drama Queens lead at U13, with U16 Brandon FC riding strong performance in the U.S. Youth Soccer National League and a title in the Florida Club Directors league this fall to a strong #1 position in their age group. Similarly, powerhouse U18 team Ponte Vedra Storm won the RIIIPL East in the fall and it has them as a strong leader for that age group.