Devin Devoy has traded a little style for a lot of substance. Devoy has never been shortchanged on raw talent, but the New England Revolution forward has now refined his game and is growing into his complete potential.

Count decision making among the areas he continues thrive in, as Devoy has recently made his verbal commitment to Northeastern.

The No. 45 ranked player in our 2012 class Top 100, Devoy is a great acquisition for the program – particularly as he continues to hone his skill and understand his game. 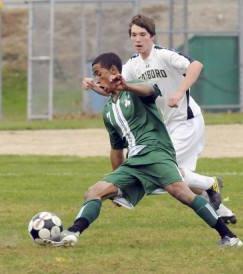 Devin Devoy
“I used to be able to rely on my athletic abilities to overwhelm defenses, but as I got older the game changed,” Devoy explained. “Players started to grow closer to me athletically, so in order to better myself as a player, I refined my vision, technical ability, soccer IQ, and also learned more positions. This contributed to my versatility and really impacted my play.”

And that’s saying a lot. Devoy had already been called into U.S. Youth National camps and made a name for himself, but he has clearly taken things to the next level.

College programs took notice, and schools like Colgate, Northwestern, Providence, Princeton and Dartmouth made his final list. In the end, he liked what he saw from Northeastern and coach Brian Ainscough.

“The university offered me everything I was looking for in a school, and when the opportunity presented itself to such a great institution, I couldn’t resist,” Devoy said.

Also making recent commitment news, is Alex Olofson, our No. 70 ranked 2012 player, who has verbally committed to North Carolina.

Olofson is a midfielder presence for CASL. He’s a hard-working ball winner able to affect the game in a variety of ways. Olofson will certainly be ready for the next level when he finishes his final year next season.

Charlie Oliver (Chicago Fire) has verbally committed to Northern Illinois for the 2012 season. Oliver is ranked No. 7 in the Midwest Region.

Kyle Martin (Lou Fusz SC) has verbally committed to Xavier for the 2012 season.

Vince Shaw (Javanon) has verbally committed to Xavier for the 2012 season.

Andrew Herr (FC Delco) has verbally committed to Michigan State for the 2012 season.

David Masolak (Chicago Magic) has signed with Loyola-Chicago for the 2011 season.