Florida freshmen will have fight for PT Today’s Signing Day analysis begins with a beast from the SEC. 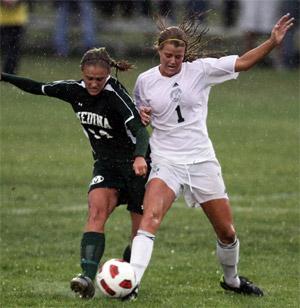 Jillian Graff (Photo by Joshua Gunter / PD)
Graff, the No. 25 player in our Top 100, is a special goal scorer and teammate of goalkeeper Burke. Andujar comes from the Slammers FC and is one of the many standouts of the ECNL. She’s No. 63 in our Top 100. Speese (No. 81) is a quick attacking player with good instincts. She’s likely to be heard from sooner than later, but then, with a group this large it’s all a numbers game.

Seton Hall
Signees: Rachel Friedman (Jersey United), Sara Haefeli (Jersey United), Mikayla Hickey (Seacoast United), Kristin Kosch (Arsenal NJ), Kristina Meier (Arsenal NJ), Peggy Nicolle (Cherry Hill FC), Angie Shehaj (Arsenal NJ), Alyssa Stipcak (FC Frederick)
Skinny: The Pirates have a versatile class full of players who are capable of playing multiple positions. Stipcak is a strong defender who can also handle midfield duties if necessary. Meier is a defender who can get the ball forward in the attack and Hickey has been known to play defender or striker. In Kosch, Shehaj and Meier Seton Hall has three teammates accustomed to building together – something the program is hoping it’s young newcomers can accomplish.

TCU
Signees: Tori Hale (Abilene Soccer Club), Natalie Werner (So Cal Blues), Alicen Wright (Legends Football Club)
Skinny: Hale is a fast an athletic scorer who is used to seeing the ball go in the back of the net. Werner comes from a great environment with the So Cal Blues where she won a US Youth Soccer National Title along with a National League crown. Wright, a goalkeeper, is a great competitor and presence in the net.

Sacramento State
Signees: Kassiana Anast (Mission Viejo Soccer Club Shamrocks Gold), Kristen Bridges (East Fresno United Fusion), Natali Robards (FC Sacramento)
Skinny: Anast is a versatile player who could help fill multiple needs for the Hornets.  She’s a natural defender but also possesses the athletic ability to thrive as an attacker, which she has also done in her career. Bridges and Robards are both midfielders though Robards is the more physical of the two. She was a high jumper in high school, which speaks to her athleticism. Sacramento State has also brought on a couple transfers that will help fill out the class.
Related: Players To Watch,
Headlines
Club Rankings HQ
View all rankings >>