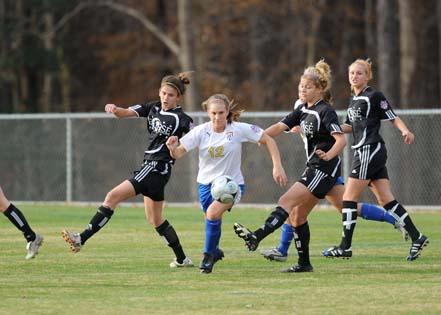 COLLEGE STATION, TEXAS – OK club soccer fans, the name of the game this week in Texas is FREEZE.

It was so cold in Texas Thursday night…(insert punch line here).  It was brutally cold. It was so cold I couldn’t feel my toes and my fingers literally would not write to take notes.

U15 Naperville Hot Shots vs. San Diego Surf
On top of that, some of the fields here at Texas A&M University, scheduled for four days of use by the way, were mostly mud due to a softball tournament played there in recent days, plus heavy rains earlier in the week. Apparently someone decided this was a good time to drive some heavy equipment or carts onto the fields, so you had some lovely ruts to go on these fields as well (the other end of the Penberthy facility featured fields in much better condition).

But in the spirit of American can-doism, the young ladies competing in the U.S. Youth Soccer National League got after it anyway. Thursday was opening night in league play, with the competition played as part of existing showcase events through the year (and in this case the NCAA Women’s College Cup). The new rival to the league, the Elite Clubs National League, begins play Friday, and will share some of the venues here.

Thursday I was able to see parts of a few good games (scroll down for results, courtesy U.S. Youth Soccer). In a U15 game, So Cal Blues were coping with the mud and cold as best they could against a talented  Sockers FC team. Blues midfielder Bella Hernandez plays a smart game in midfield with good touches and quality decision-making. Forward Amber Munerlyn is very dangerous up front due to her speed, and she showed some craftiness in taking a nice goal from distance. Kelly McCann was aggressive and smart in defense with her reads and steps.

For Sockers, Michelle Mottonen is another smart midfield player, making good decisions on the ball. Defender Gianna Dal Pozzo also showed intelligent reads and steps, plus a good ability to distribute accurately out of the back, almost like another midfield player for Nilton Batata’s team. 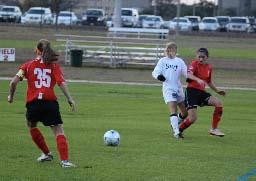 U15 Naperville Hot Shots vs. San Diego Surf
In the Naperville Fireballs match vs. San Diego Surf, there were a number of players for the California team I liked, but their roster information wasn’t included with the team packet. For Naperville, Katherine Short showed some smart touches and very good vision to spray the ball around the field (although the mud made this more difficult than usual).

In U16 play, Dallas Texans and Cleveland put on a great show (on one of the better fields). Texans were up 2-0 in the 2nd half, but Elizabeth Bollinger fired home a rocket to make it 2-1 and then Florida-bound Jillian Graff scrambled one in to tie the game at 2-2. Texans answered quickly however as Taylor Schneider scored a goal of the year candidate, driving home a shot into the upper 90 from 25 yards out to give Texans a 3-2 lead they would not relinquish. Rosa Medina made a series of strong saves, including three in five minutes on CFC’s Dayton verbal, Kelsey Smigel.

CFC left back Jaclyn Campo is uncommitted and should be the target of many schools. She is a good athlete with good size and can deliver a ball up the flank or into the area with accuracy and purpose. The Texans team is loaded with talented players including outside back Whitney Jaynes, a Texas recruit, who earned her keep and then some with hard work in the back line Thursday. Jana Jeffrey was active winning many balls in the middle and also scored a goal of her own, while Taylor Grant always looked dangerous up front.

And then it just got too cold to watch anymore, but I will be back out this morning (with a new hat and gloves purchased tonight).

COLLEGE STATION, TEXAS (Dec. 3, 2009) – Elite youth teams from across the country in the Under-15, Under-16 and Under-17 Girls age groups kicked off the US Youth Soccer National League play at Penberthy Fields in College Station, Texas Thursday.

Under-15 Girls
So Cal Blues – Draluck (CA-S) and Sockers FC Chicago (IL) Under-15 Girls were both looking for a win, but it was So Cal that wrapped up their victory within minutes. Kelly Latimer had a 33rd minute goal to put So Cal on the board. Kelly Fitzgerald knocked in So Cal's second goal only 3 minutes later. The Sockers remained scoreless until the final whistle blew for So Cal to slate their first win of the season.
The San Diego Surf (CA-S) Under-15 Girls were held scoreless by NSA Premier Fireballs (IL) until the 30th minute when Morgan Batcheller netted one for the Surf. Teammate Caroline Muoio followed suit with a goal of her own in the 38th minute. San Diego Surf held tight on the defensive end to win the game 2-0. Surf look to follow in the footsteps of their fellow Under-16 San Diego Surf team who, after capturing the National League title last season, went on to claim the 2009 US Youth Soccer National Championship.

Under-16 Girls
The Under-15 Girls Scorpions Soccer (MA) grabbed the game winner with five minutes to play against NSA Premier Fury (IL) to take a 1-0 victory in their National League opener. Paige Almeida was the hero for Scorpions with her 75th minute strike.
As the reigning 2009 US Youth Soccer National Champions, San Diego Surf (CA-S) Under-16 Girls are out to hold their own and earn the right to advance back to Nationals to defend their title. In the opening game of the National League season, they held their own with a 4-1 victory over KC Select Scream Red (MO). After KC Selected opened with a 14th minute Alex Ostrander goal, Surf countered in the 30th minute thanks to an Alexandra Bailey shot. Nicole Sherwin pulled Surf into the lead with a 37th minute goal. Coming back from the half, Kendall Kraus (59:00) and Stephanie Hamilton (68:00) wrapped up the 4-1 Surf win.
Under-17 Girls
Syosset Sting (E-NY) opened up their 2009 National League campaign with a 4-1 win over the Eagles of California South. Gabrielle Charno got Syosset on the board in the 12th minute and Kerry Ann O'Connor added a second goal four minutes later to take control of the game. Emily Kenney pulled the Eagles back within a goal in the 20th minute, but in the second half Madison Kittay and Liana Cornacchio put the game away for the Sting with 43rd and 70th minute strikes.
The Dallas Texans 93 Red (N-TX) claimed the US Youth Soccer Double in 2008 by winning both the National League and National Championship titles. They faced a familiar opponent in their opening game of the 2009 season, Cleveland FC (OH-N), who the Texans defeated 3-2 during group play of 2009 National Championships. Today's result was also familiar as the Texans jumped out to a 2-0 first-half lead on goals from Abby Smith in the 6th minute and Jana Jeffery in the 40th minute. Cleveland FC roared back in the second half with goals from Elizabeth Bollinger in the 55th minute and Jillian Graff in the 75th minute. But the Texans again took a 3-2 victory as Taylor Grant scored the winner with three minutes left to play.
The Slammers (CA-S) avenged a 2-1 defeat to the Montclair United Thunderbolts (NJ) from the 2008 National League by scoring two second-half goals tonight for a 2-1 victory to start the new season. Montclair's Tatiana Saunders gave her team an early lead in the 2nd minute, but Slammers were determined this time around as Kassidy Hause scored in the 49th and 68th minutes to secure the win.
Last year's National League runners up, So Cal Blues – Dodge (CA-S), looked determined to make it back to the National Championships as they defeated the Ponte Vedra Storm (FL) 3-0 in the season opener. Kaylie Davidson found the net in the 32nd minute, and two second-half goals from Gabriella Garcia and Erica Mazeau in the 53rd and 71st minutes sealed the game for the Blues.