From the ECNL to the U20 World Cup? 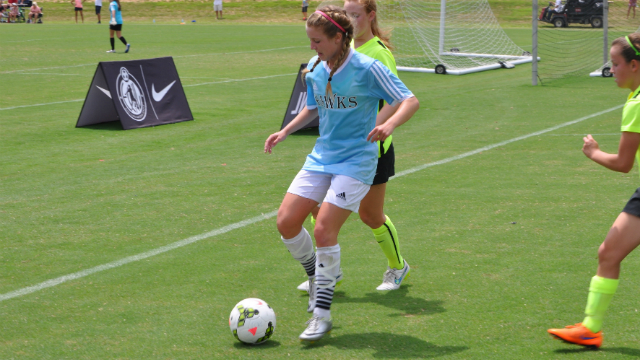 The ECNL didn’t waste time becoming the primary generator for USYNT women’s prospects. Nearly the entire 2014 U20 World Cup roster was culled from ECNL clubs, and over the summer Morgan Brian became the first player with an ECNL tie to play in a senior Women’s World Cup.

The new U20 cycle is in its second year after spinning up last fall, and we’re just a year away from another World Cup to digest. Coach Michelle French is busy putting together her squad, which means another batch of top quality players. Here’s a look at four ECNL stalwarts who could make a push for the roster with big club years in 2015-16.

When it comes to senior center backs, there are none more accomplished than Marwede, who has the chops to do just about anything you need of a center back in the middle of the park. Her size is the most obvious facet about her game, but there’s considerably more to it than that. This Eclipse side prefers to play it out of the back as much as possible, and after winning the U16 national championship in 2014, Eclipse made it back to Richmond for the ECNL Finals again in 2015 (and finished third in their group).

Marwede’s leadership from the middle shouldn’t be overlooked. She has pillow feet for her size, and if French decides to mix it up and go more along the ground, she won’t find a better mix of aerial and on-the-ball skills than Marwede. A perfect option either off the bench late as a dead ball threat in the box or simply as the main option in the middle. Her height isn’t to be missed.

That the PDA U16 team didn’t make it out of its ECNL Playoffs group in Seattle was one of the biggest surprises of the tournament. That team was loaded down with quality players, led first and foremost by Ferreira, one of the most exciting attacking players in the nation at any age level. Ferreira was in U17 national camps at around the time the U20 team left for Canada for the World Cup last summer, and the fact that she’s a 2017 makes her young for a U20 roster by the time 2016 rolls around. But if Mallory Pugh proved anything as a 16-year old at the competition in 2014, it’s that youth doesn’t necessarily mean the player can’t make an impact.

Ferreira is that rare player comfortable dropping into pockets between the defensive midfield and back line and prying them open like the door to an elevator stuck between floors. She can play either that role or that of an out-and-out striker, which makes her a versatile cog to have in your pocket come World Cup time. The key for Ferreira is how she makes the jump to the U17 ranks this season, and whether her more technical style can win out over the increased physicality required at higher age groups. Still, Ferreira can make an impact next year with a big season with PDA.

Davidson’s rise to prominent with the Force has been something to behold. De Anza’s U16 side won the ECNL national championship last year behind a tremendous multi-faceted performance, but Davidson’s spadework in the defensive midfield stole the show. She’s perfectly engineered to sit deep on a team that likes to play through its midfield. The amount of times she casually stepped around markers to easily create space and generate chances for her attacking midfielders beggars belief.

Davidson is a 2016, which means she’ll be headed into college by the time the U20 Women’s World Cup wraps next summer. Since she’s perhaps the most mature player on the list and the one capable of creating the widest swath of impact immediately, she probably deserves the most attention from French and her staff. She reminds you of another player who started college just after the 2014 iteration named Andi Sullivan. And like Sullivan, Davidson plays as a holding midfielder (ideally) and is headed to Stanford. The fact that a Sullivan-Davidson midfield likely gets two years together on The Farm should terrify the rest of the country. She was deployed as a defender in the last U20 camp, so her versatility should help her going forward.

Since we’re going hypothetical today, Spaanstra makes the grade. Fact is, the only reason she’d be left off the roster is because of her age, not her ability. She can run circles around a number of players at higher age ranges, she’s simply young. As a 2018, she’d be 16 by the time the World Cup rolls around next summer, but there’s precedent for that. Spaanstra is in the mold of Pugh, who made her way to a U20 WWC roster before firing up her junior year of high school. And she did quite well. Even if Spaanstra is deemed too young to justify taking her over other quality forwards in the pool, know that she should at least be given a look before the final decision comes down.

The good news is that the U20 coaching staff seems to agree, at least provisionally. Spaanstra made a U20 WNT roster for an LA camp in August, which put her alongside pretty much an entire roster her senior. That kind of experience is vital, and it’ll help French make an informed decision on that front next summer. If Spaanstra, the very best kind of quick-footed forward, can make inroads this fall, and her form with the Hawks doesn’t drop, she’ll undoubtedly be in the mix next summer. Her speed and decision-making is already at U20 levels. The bigger question is whether she can handle the physicality.