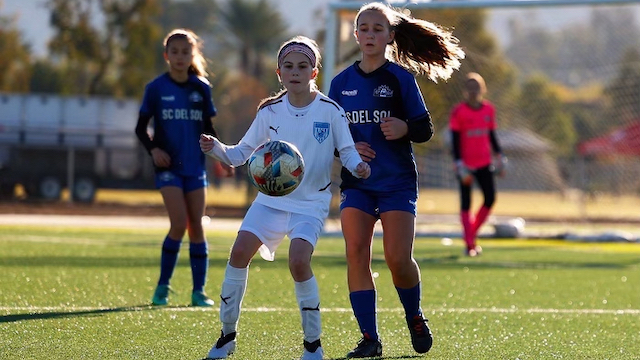 The Girls Academy (GA), the only nationwide all-female youth league, has announced  further details of the second event in their Champions League competition. This event will take place March 10- 15 on the campus of IMG Academy in Bradenton, Florida. It is a continuation of the group play from the first  event in California in December 2021.

"We are excited for the second portion of this year's inaugural Champions League competition in the Girls  Academy,” said Lesle Gallimore, Commissioner, Girls Academy. “These clubs and wild card teams were resilient,  determined, and overcame a lot of obstacles in the 2020-2021 season to earn their place in the GA Champions  League. The December competition was a terrific preview of what lies ahead at this stand-alone event in March  on the pristine grounds of IMG Academy in Bradenton, Florida. The event will provide a focused scouting  opportunity for college coaches and US youth national team scouts. It will be fun to watch teams and clubs  aspire to be the best of the best while modeling the high playing standards we strive for in the Girls Academy."

About the Girls Academy Champions League: The GA Champions League provides an additional competitive  platform for the league’s top clubs and teams on a national stage. The competition allows players to compete  and test themselves against the best of the best from across the country in front of college coaches and US  Soccer Youth National Team scouts. Clubs and teams earn qualification through their success in the regular  season. This year's event qualifiers consist of the top two (2) clubs in each of the seven (7) GA conferences from  the 2020-2021 season, based on final league standings. An additional two wildcard teams per age group were  awarded to the two best performing/highest ranking wildcard teams from each age group, based on National  Playoff results from June 2021. The first Champions League event in California in December 2021 attracted  hundreds of college coaches and US Soccer Youth National Team scouts.

About the Girls Academy (GA): The Girls Academy League is the leading youth development platform for the  best female soccer players in the United States, which includes 8 conferences, 80 clubs, and over 10,000 players  across the nation. The GA is the only all-girls national youth soccer platform that represents the collective vision  of member clubs and actively engages the voice of the players to take real ownership in their journey. The  league engages the voice of the GA players through the first-ever player Advisory Panel. The GA is committed to  cultivating an environment that empowers each player to reach their best potential as an exceptional athlete  and human being by celebrating the player’s journey with a lifelong love of the game through competition,  showcases, and camaraderie. In addition to league play, this season features National Showcases and Playoffs,  the first-ever Champions League Competitions, TalentID National and Regional events, and Regional  Competitions for younger age groups.