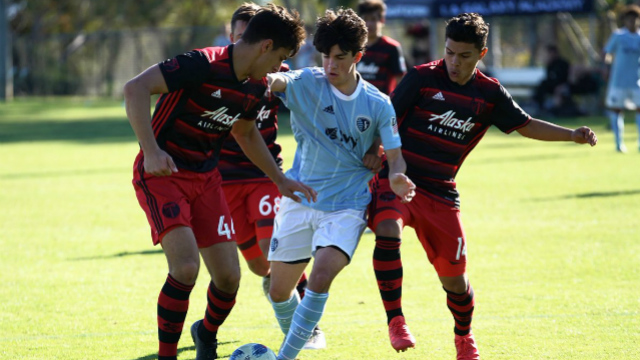 The 2018 Generation adidas Cup Champions Division field is set after the final round of U17 qualifying games concluded over the holiday weekend.

Eight teams -- three from two regions, and two from the other -- emerged atop their respective standings, and will advance to face international opponents at the end of March in Frisco, Texas at the Generation adidas Cup finals. The rest of the teams will make up the Premier Division.

East Region hosts Atlanta United put together a dominant weekend, sweeping two games against New England Revolution and the New York Red Bulls by a combined score of 11-1. Deedson Vixamar was one of the standouts for Atlanta, scoring six goals in the two games, as Atlanta finished equal on points with NYCFC.

D.C. recovered well from its opening game defeat at the hands of NYCFC, defeating the Philadelphia Union 3-1 and trouncing the New England Revolution by a 8-1 score to advance. Gabe Segal, a guest player from Bethesda SC, scored five goals in the three games. Despite finishing level on points with Chicago, D.C. advanced with three wins in regulation, edging the Fire which won twice in regulation and once on PKs.

Toronto FC finished the trip to Houston unbeaten, winning a top-of-the-table clash against FC Dallas by a 1-0 score to open the weekend trip to Houston. Jacen Russell-Rowe accounted for the game-winning goal in that one. The Reds drew 2-2 against the Colorado Rapids in the second game, winning on penalty kicks, before defeating the Columbus Crew on Monday by a 3-1 score.

Despite the opening weekend loss against TFC, FC Dallas bounced back with a pair of wins to secure progress to the Generation adidas Cup Champions division. Johan Gomez accounted for a pair of goals in a 2-0 defeat of the Chicago Fire on Saturday, while Nico Carrera, Ricardo Pepi and Gibran Rayo each found the back of the net in a 3-0 win against the Colorado Rapids.

It was a tight finish atop the West Region, as Sporting KC, LA Galaxy and the Portland Timbers all progressed.

Sporting KC opened the weekend with a 3-0 defeat at the hands of the Galaxy, which hosted the President's Day weekend matches. SKC bounced back with goals from Cameron Duke and Danny Goddard, leading the way to a 2-0 win against Portland Timbers on Saturday. A 1-1 draw with the Sounders on Monday officially clinched second place.

The Galaxy enjoyed a dominant weekend on home turf. Cam Dunbar, Efrain Alvarez and Brian Hernandez provided goals in the Friday victory against Sporting KC, and LA followed that up with a 5-0 win against San Jose on Saturday. Marco Ceja then scored both goals in a 2-1 win over Portland Timbers to wrap up the weekend and secure progress.

Despite the losses to SKC and LA, the Timbers managed to finish third thanks to a shootout win against Real Salt Lake to open up the weekend following a 1-1 draw.