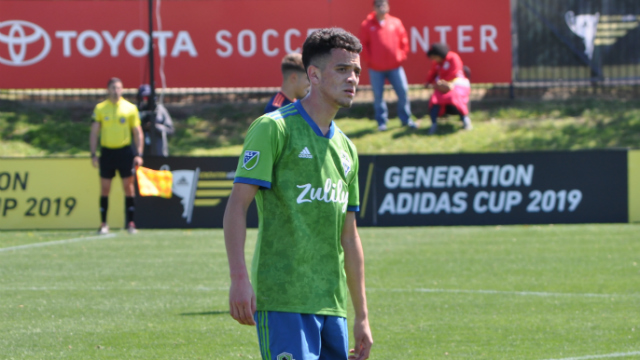 And then there was one.

The Seattle Sounders continued to grow into the Generation adidas Cup, advancing to the Champions Division semifinals thanks to a 1-0 win against River Plate on Tuesday.

U.S. Under-17 MNT striker Alfonso Ocampo-Chavez netted the game's lone goal in overtime, scoring with two minutes left as penalty kicks loomed. Teammate Chris Hegardt slipped Ocampo-Chavez behind the back line, and he finished first-time over the River goalkeeper to seal the game.

In the second half of extra time...

It was a close encounter for the bulk of the match, but the Sounders never looked overmatched. Goalkeeper Conrad Lee made a few key saves that denied River Plate at various junctures of the game, including a spectacular save when a shot deflected off his own teammate.

With the score knotted at 0-0, it set the table for Ocampo-Chavez, who has now scored three game-winning goals in three straight games: he tallied the winners in the final two group games against Flamengo on Sunday and Montreal on Monday, as the Sounders head to Thursday's semifinal.

Awaiting Seattle in the next stage of the tournament is Premier League side West Ham. The English academy outfit topped LA Galaxy in overtime, as Kamarai Swyer nabbed the game winnger in overtime. Kai Corbett put the Hammers in front early in the game, only to have his strike canceled out by a sensational finish from Cameron Dunbar. The U.S. U17 pool player combined well with teammate Kobe Hernandez-Foster despite the loss

Spanish side Valencia continues to have the look of a team that could be labeled favorites at this point in the competition. Yet to lose during its trip to North Texas, the La Liga outfit scored twice in the second half to hold off Real Salt Lake. Andres Garcia Moreno and Ferran Magraner provided the goals.

Jakov Vasilj scored twice and Halid Alghoul added another in the game's first 25 minutes, staking the European side to a 3-0 lead. Midfielder David Rodriguez cut into the lead before the break, but FCD missed a handful of chances to get another back, eventually losing by a 3-1 score.