Gatorade State POY to join A-10 Commitment: Signed to USC for the 2012 season.

Randle is a four-star defender who helped her Seattle-area high school team to the state title this past year. Randle played well during U.S. Youth Soccer Olympic Development Program training in February and brings good experience. She competes. 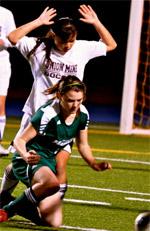 A forward, Early is set to join a talented USC class that will include Miranda Freeman, Madison Kaplan, Kayla Mills and Samantha Trenary.

Commitment: Verbal to Gonzaga for the 2013 season.

Anderson is an essential player on her ECNL Real So Cal squad. She’s a quick defender with a great understanding of the game and the ability to also get forward. She’s also been a team captain.

Commitment: Verbal to Dayton for the 2013 season.

Leedom is a decorated scorer and Kentucky Gatorade State Girls Soccer Player of the Year. She’s a dynamic forward with good size and brings a tradition of winning and competing at the highest level.

Lauren Webb (Oakwood SC) has verbally committed to Merrimack for the 2013 season.

Anastasia McCleary (Brisbane Premiere) has signed to Alabama State by way of Coolangatta, Australia, for the 2012 season.

Alena Salsberg (Prospector Fury) has signed to Alabama State for the 2012 season.