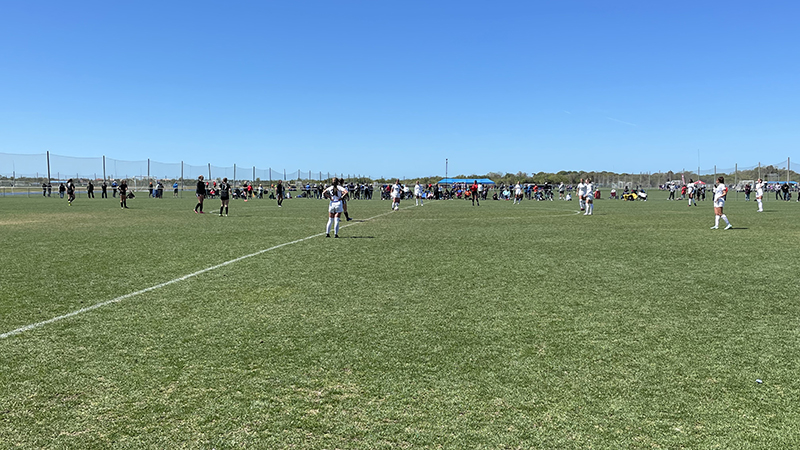 BRADENTON, Florida – The fourth day of the GA Champions League Soccer Showcase at the IMG Academy started off with beautiful weather, which proved to be ideal playing conditions all around the Bradenton area.

MORE: Scores and standouts on Sunday

The early action was filled with strong action and players hoping to lead their respective clubs to meaningful Monday games. Recap a few of the games below.

The highly anticipated matchup between FC Bay Area Surf 04/03 GA and TSJ FC Virginia 04 Girls Academy ended up being one of the more intense defensive games of the late morning afternoon contests amongst the U19 teams on Sunday. Both clubs were looking to clinch a spot in the championship final with some solid soccer on the third day of the GA Champions League Soccer Showcase.

In a matchup full of Division I talent, both teams displayed why they were a couple of the top U19 clubs in the country. Bay Area Surf gained the 1-0 advantage in the first half over TSJ FC Virginia and would not relinquish the lead despite many opportunities throughout the match to do so.

University of Virginia commitment Ella Carter had multiple shots that banged off the crossbar that could’ve equalized the game. Down the stretch in the final moments in stoppage time, TSJ FC Virginia was still plugging away, searching for an equalizer. Bay Area Surf’s defense stood tall and held on for the close win to move on.

"It was a great match between a couple of the best two teams in the country,” TSJ FC Virginia 04 Girls Academy director Bobby Puppione said. “(FC Bay Area Surf 04/03 GA) won the national championship last year and we were a national finalist in the age group just below them. So when you bring these two teams together and hundreds of college scouts, it provides for amazing opportunities for these girls.”

In another entertaining U19 match being played just a field away from the Bay Area Surf-TSJ FC Virginia matchup, there was another exciting contest going on that went the distance. City SC San Diego had to play beyond overtime and into penalty kicks, winning 4-3 on PK’s.

If you wanted to watch a full match plus a little bit more, this contest had it all. With the teams tied coming out of intermission, they headed into overtime hoping to avoid going to penalty kicks. City SC San Diego had a couple scoring chances, including one going off the crossbar.

Each team was steadfast in playing well defensively and went into penalty kicks hoping for the crucial win. It would come down to the very last kick, and City SC jumped around in jubilation when they notched the pivotal 4-3 win.

"Yeah, I think it was an exciting way to win in this environment and it was really good for the girls,” City SC San Diego manager Courtney Drummond said. “It was a very even match and could’ve went either way to be honest. We are very excited to play Bay Area. They are another good team in this tournament.”

In one of the afternoon matches in the U19 group paired up the local IMG Academy U19 Elite Girls against the visiting Colorado Rush 03/04 Academy GA. The Rush brought in a roster that featured all but three of its players committed to playing on the next level and they displayed the talent on the main field.

The Rush were able to get a goal in each half to upend host IMG Academy 2-0. Colorado was able to get up 1-0 in the opening half when University of Arkansas commitment Kacie Laurie notched the first goal. To seal up the win for Colorado, Florida State University commit Peyton Nourse scored in the 85th to put the match away for the Rush.

Nourse was able to get behind the IMG Academy defense for the go-ahead score. Colorado head coach Russell Finch was pleased with the ball movement his team had throughout the match and he made some adjustments in order for the Rush to move onto Monday.

“In the first half, their outside backs were getting the best of us,” Finch said. “So we ended up going from a 3-4-3 to a 3-5-2 and that gave us natural width and I didn’t see the outside backs come up in the second half. I thought that really was the key.”