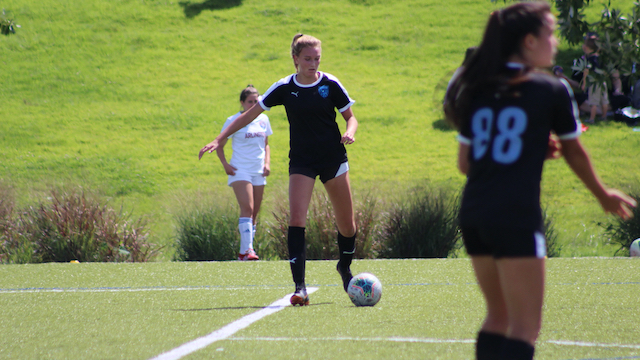 The Girls Academy League U17 age group features a number of the top recruits in the country. The first few months of the season has seen some former stars of the Development Academy settle into their new digs, but some new names have also emerged.

SC Wave Director of Coaching Giuliano Oliviero spoke with TopDrawerSoccer last week about joining the league, the level of competition, and his teams’ early success.

“The GA has been a platform we have been looking forward to for quite some time,” Oliviero told TopDrawerSoccer. “It was not a perfect start for all involved in 2020 with the current pandemic but with the work rate and time put in of all GA members we were able to have a very productive Fall season. Competition is what top tier clubs search for and we feel that we have found this with the girls Academy.”

Being welcomed into the new league has been incredible for the club, which applied for admission to the Development Academy for the past two seasons, but was denied both times.

“The 2004(2019 USYS National Champions) and 2005 groups have been having success for a few years so they were going into the GA with a confidence of keeping their current success but also with an attitude that they felt they could compete with the best competition in the country,” Oliviero said.

TSJ FC Virginia has also been one of the best teams in the Girls Academy U17/2004 age group through the first few months of the season. The club sits at the top of the standings in nearly every age group in the Mid-Atlantic Division, but the 2004 team has been extra impressive compared to their peers.

TSJ FC Virginia U17 is 8-0 on the season with 46 goals scored and zero conceded. TSJ FC Virginia’s Girls Academy Director Bobby Puppione told TopDrawerSoccer that his teams are happy to be back on the field safely, and using video to help with the training and scouting/recruiting process.

“It has been a good start to the season for our teams in the Girls Academy League,” Puppione said. “Like everyone, we have been dealing with a global pandemic but it is great the teams have had an opportunity to safely compete with limited travel, get video for college recruiting, and to be scouted by US Soccer's national team scouts. Through our partnerships with Veo and InStat, we have been able to use this technology to help maximize the players' potential in our daily training environment. We look forward to playing again in the winter / spring time after a break for the holidays.”

While SC Wave and TSJ FC Virginia are among the league leaders, there are standouts from every conference in the league through the first few months.

Oakwood and South Shore Select (2-1) are off to strong starts in the first part of the season. Oakwood rattled off a 4-1 record through the first few months. Matt Cameron’s side has been out of action since October.

The Northeast sides are scheduled to get back into action in March.

TSJ FC Virginia looks like the team to beat in the U17 age group. FC Virginia has 46 goals scored with 0 goals conceded through the first eight games of league play. Courtney Andersen, Ella Carter, Ava Marvin have been among the leaders in the attack, according to InStat statistics. FC Virginia will return to the field in the spring with eyes on keeping the perfect record alive.

Tophat GA Gold holds the top spot in the Southeast. The Georgia club is 9-1-1 on the season. Sarah Sirdah and Ansley Elizalde have been the top scorers with 10 and 7 goals a piece. Delaney Thomas and Sirdah are combined for leading spot in assists with four each. Denver Tolson has been a standout in goal.

IMG Academy handed Tophat their only loss of the season so far, back in October. Zoey Lee, Dolce Villaflor, Alexis Washington and Savannah Sabo have been among the standouts for IMG.

SC Wave is top of the table in the Mid-America. The Wisconsin club is 8-0-1 on the season with an impressive plus 46 goal differential in the nine games. Recent Purdue commit Kayla Budish leads the team in scoring with 27 goals and five assists in nine games this season. Elena Zuchowski (attacking midfielder), Lily Hanke (goalkeeper), and Capri Oliviero (defensive midfielder) have also been standouts for SC Wave this season. Zuchowski and Capri Oliviero have been dominant in the midfield for SC Wave. Zuchowski as the creative force from the center of the field, and Capri Oliviero has been the unsung hero with her work ethic and tactical brilliance. Coach Oliviero did say that the success of his team has been a cumulative effort from the whole squad.

Cincinnati United CUP is the only team to take any points off SC Wave this season. CUP held Wave to a 4-4 draw in November. CUP is scheduled to be back in action in January.

Sporting Blue Valley’s attack has been nearly unstoppable in the Girls Academy Frontier Division this season. Sporting has scored 67 goals in 13 games this season. Sydney Watts is leading the way with 44 goals and 12 assists according to InStat. Avery Nguyen (18 goals, nine assists) and Kaya Lee (10 goals, 17 assists) have also been standouts in the attack.

Utah Royals FC - AZ is off to strong start in the Southwest with a 8-0-1 record. The Arizona club has a balanced attack with Isabella Leonard, Anna Castenfelt, and Ellie Johannes leading the way. Taylor Prigge has been the standout in goal.

Pateadores Academy (1-0-1) is also undefeated at this stage of the season.