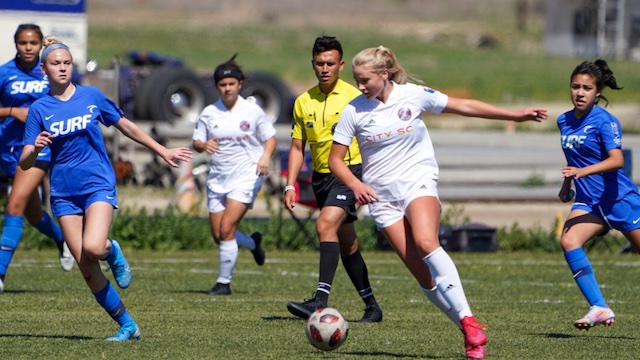 The Girls Academy League playoffs from Oceanside, California kick off on Wednesday. The all-girls league is enjoying a successful inaugural season and the week-long playoffs/showcase is the pinnacle for this campaign.

The groups for the playoffs were announced late last week. Take a look at the teams and players to watch from the event. Check back on TopDrawerSoccer throughout the event for daily recaps, standouts, and follow us on social media for additional coverage from the event.

The Girls Academy has the most clubs willing to play elite talent with older teams, which can make prognostication for the youth level tricky. SJEB Rush (17-0-2) and TopHat Gold (11-0-2) are the two unbeaten squads in the 08 age group this season. SJEB Rush led the nation in goals scored with 62. TopHat was unquestionably the top defense with only three goals conceded. Utah Royals-AZ is the big wildcard. If KK Ream plays with the 08 age group, they probably should be considered the team to beat. Ream has played up multiple age groups at previous national events with Utah Royals-AZ.

Oklahoma Energy is another team to watch. Energy went unbeaten at the national event in the spring with a 2-0-1 record. Energy has taken down all challengers recently including a handful of the top ECNL teams in local tournaments. Sophia Baker has been the star of the attack for Energy with over 20 goals this season.

NEFC and TSJ FC Virginia are the top two teams in this age group. Nationals, from Michigan, is 24-1 on the season. TSJ FC Virginia holds and unbeaten mark at 18-0-2. Nationals went 3-0 during the national event in May - all wins versus teams that qualified for the playoffs. The strength for Nationals has been in the attack. They scored eight goals in those three victories, and lead the nation in goals scored with 77. TSJ FC Virginia also went 3-0 at the national event in May. Hannah Minogue, Bree Bridges, Chloe Nelson, and Mya Townes lead the way for FC Virginia. FC Bay Area Surf is another team to watch in the 07 age group. The Northern California squad is 8-0-3 on the campaign and averaging more than three goals scored per game.

The 06 age group feels more open than any of the other groups at the Girls Academy playoff. There is no unbeaten team at the stage of the season. Nationals, the top seed, is 20-1-4. Oklahoma Energy, the No. 2 team, is 17-3. IMG Academy might be considered the favorite after claiming a 12-1-2 record. IMG went 3-0 during the national event in April. Abigail Gemma, Carla Small, and Chloe Shimkin lead the IMG squad. Local squads West Coast FC and Albion SC could use the advantage of limited travel to pull some upsets in this group. Milan Keisdorf, Katherine Le, Emily Davey, and Riley Crooks have been among the standouts for West Coast this season.

NEFC is the top team in the 05 age group in points per game (2.56) and goals scored per game (3.44). Isabella Garces and Nicollette Kiorpes, members of the U.S. U17 Women’s National Team, are among the standouts on the NEFC roster. SC Wave’s dynamic attack will be on full display in Group C. SC Wave punched in 66 goals in 23 games this season, but struggled in the national event in April with a 0-1-2 record. TopHat Gold is another team to watch in this age group. Sophia Roma and Reese Black are among the standouts for the TopHat squad.

There is plenty of attacking talent in the 04 age group. SC Wave and Colorado Rush both topped over 70 goals scored this season with 77 and 74 respectively. Peyton Nourse paces the Colorado attack. Kayla Budish leads the way for SC Wave. Both Nourse and Budish are part of the Youth National Team program. With so much attacking talent, it will likely be the defense that can hang that will have the last laugh. IMG Academy and Arlington Soccer Association only conceded seven goals each this season. Zoey Lee has been a key player in the midfield for IMG the season.

This is a question of whether any team can stop FC Bay Area Surf. The Northern California squad announced their arrival during the last national event and comes into the playoffs as the heavy favorite to win the first championship in the Girls Academy League.