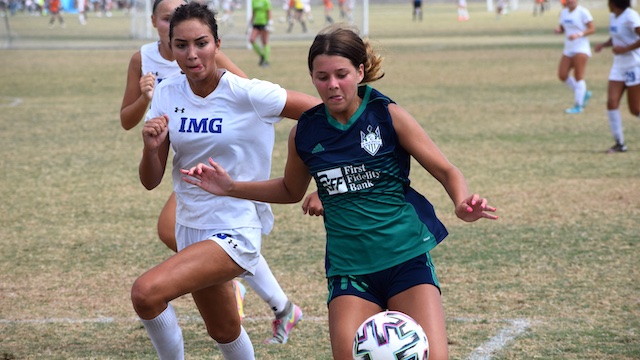 OCEANSIDE, California - The final day of group play for the Girls Academy playoffs wrapped up on Monday from the SoCal Sports Complex. The 05 age group was in action with eyes on advancing to the quarterfinal games later this week.

The 07 and 08 age groups had their semifinals on Monday. Cincinnati United defeated Weston FC 3-1 and Lou Fusz topped Oklahoma Energy 2-1 in the 2007 age group. The two victors will meet on Tuesday in the championship game.

FC Bay Area captured the first championship in Girls Academy history with a 2-0 win over Tophat Gold on Monday in the U19 age group. FC Bay Area only conceded one goal during the five-game run to the title, which was the most possession dominant display for any side at the event.

As the GA Playoffs wind down, one overarching theme has stood out from this event. The soccer education of the parents from previous national league events is a stark contrast. There is a sharp dialogue from the sidelines at Girls Academy events. I overheard a parent discussing tactics on how to breakthrough a low block during one game. One parent bemoaned the short corner from Tophat the led to FC Bay Area’s opening goal in the U19 championship game. There was also a family watching the Euro Round of 16 game between France and Switzerland in the parking lot on Monday in a tailgate setup that was easily the highlight of the day. There is a much smarter audience on the sidelines now.

Check out the individual standouts from the Girls Academy playoff games on Monday below.