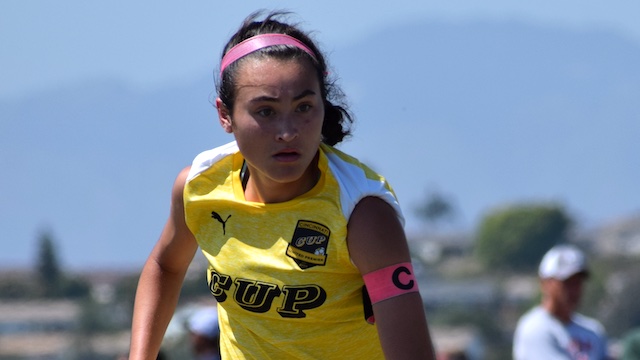 The semifinals and finals for the Girls Academy inaugural season will be held this weekend in North Carolina. The competition is still ongoing for the 2006, 2005, and 2004 age groups. All of the semifinal games will be held on Friday with the final and third-place games on Sunday.

For Cincinnati United, this could be an unreal first season in the new league. The Ohio club already won the national championship in the U14 age group in June. Cincinnati has a team in both the 2005 and 2004 semifinals on Friday - the only club with two teams at the event. Oklahoma Energy also had a chance to win a second national championship this week. Energy won the hardware in the 2008 age group in June and hopes for a repeat with the 2006 squad.

Check out a preview for every game below.

Oklahoma Energy emerged as one of the teams to watch during the playoffs. It’s a fun combination of attacking flair with late-game theatrics. Winger Genevieve LaMarche has been in fine form with timely goals. The dynamic attacking talent has an array of goal scoring celebrations with an homage to Cristiano Ronaldo making an appearance during the playoffs.

NEFC is a bit of a surprise to be at this stage. They finished third in their conference during the regular season. NEFC found their rhythm in Oceanside and knocked off on of the top seeds in Nationals in the quarterfinal. Sasha Ceol, Kendall Bodak, and Ayla Sahin were standouts in that quarterfinal game. They will face a similarly difficult task in the semifinal against a talented Energy side. If Bodak can get on the ball and run the show, NEFC will be hard to beat.

IMG Academy is the clear favorite in this age group. The team has been top of the table since the start of the season and was the only team to win the quarterfinal matchup by more than one goal - against a very good Lonestar team too. West Coast is a scrappy underdog with a puncher’s chance. IMG is built with a strong defense anchored by center backs Abigail Gemma and Rylee O’Shea. The left side of the team is the strong side with Carla Small flying forward from outside back and Chloe Shimkin providing her creative genius in the attacking wing.

After losing their first game of the regular season, West Coast FC won 12 of the next four games in conference play in the GA. They are playing with a lot of confidence right now. Winger Emily Davey was one of the breakout stars of the playoffs, but it’s not a one-player show. The West Coast midfield is organized and skilled. The defense only let in seven goals during the regular season.

This is going to be a great game. It will likely come down to a midfield battle. Weston wants the ball and wants to move it quickly between the midfield trio. The Florida side showed their quality in the win over Tophat. Abriella Moss, Jada Tuffin, and Ashley Pennie were standouts in that win. Julianna Harris was a standout in the attack.

Utah Royals has plenty of talent to make this a must-see for college coaches. Anna Castenfelt had plenty of eyes on her during the playoffs in Oceanside and she lived up to the billing. Hope Leyba was the standout in the quarterfinal win.

Cincinnati is unbeaten this season - regular, showcase, and playoffs. The team has not suffered a loss in Girls Academy play in 2020/2021. It’s an impressive run of results that helped the team grab this spot in North Carolina. There were plenty of standouts in Oceanside from CUP. Kennedy Clark had a game for herself when she willed two goals late. Tamia Graham was unstoppable at times. Ava Arengo was the engine of the team in the midfield. They’ll need to all be in top form against a talented Oakwood team.

Oakwood earned a spot at the semifinals after a wild win over Colorado Rush in the quarterfinal round. After going through pool play without conceding a goal, Oakwood gave up three to Colorado Rush in the quarterfinal. The Oakwood attack had the last laugh though, and the attack will once again be on display in North Carolina. After scoring 15 goals in four games in Oceanside, CUP will need to slow down the Oakwood attack to have a chance in this one.

Nationals bring one of the most impressive streaks to the event in North Carolina. Nationals went through the group play and the quarterfinal without conceding a goal. The last time Nationals let in a goal was June 3 against Midwest United. U.S. Youth National Team goalkeeper Leah Wolf has had a fantastic season for her club side.

Sydney Taylor and Landen Gooley were standouts in the win over OL Reign for CUP. The CUP defense did well in Oceanside with only one goal conceded during the three group play games. This is shaping up to be a defensive slugfest.

Ella Carter and Sophie Johnson led the FC Virginia squad in the quarterfinal to a spot at this stage. They face a fellow East Coast powerhouse in Tophat at this stage. The clubs are familiar with each other so there is not much mystery in this affair. Johnson and the FC Virginia defense will be tested - this is a very good Tophat side - but they’ve met and exceeded all challenges up to this point.