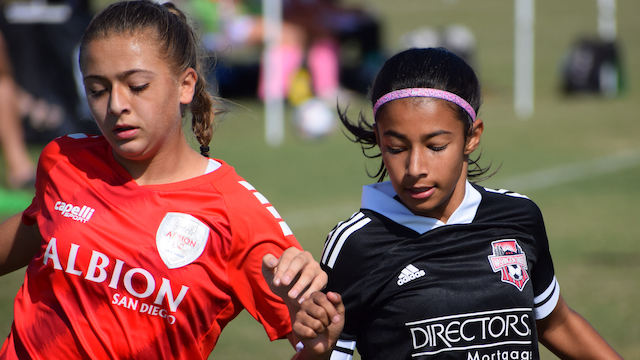 OCEANSIDE, California - The Girls Academy had the West Regional showcase over the weekend at the SoCal Sports Complex. The regional event features the teams in the youngest age groups in the national league (U13 and U14) playing three games in three days against teams from outside of their conference.

The event is a scouting opportunity for youth national teams, but it is also a preview for teams to showcase the next wave of talent at their clubs. Sunday featured some tired legs from all involved after some teams were at the end of the three-game jaunt while others were in the middle with still one more day of play on Monday.

The Girls Academy had some highlights on the day. Albion SC San Diego continues to build a strong development program with a clear identity through the teams, which is always a positive sign for the quality of the club. The Albion 08 team played some quality soccer on the day in a draw against Washington Timbers. Colorado Rush 09 crushed the competition at the event. Rush finished 3-0 with 23 goals scored and only two conceded.

TopDrawerSoccer highlights some of the standouts from Sunday’s games below. Not every roster for Girls Academy teams are available so some player names may be missing. Please email any corrections to editor@topdrawersoccer.com.