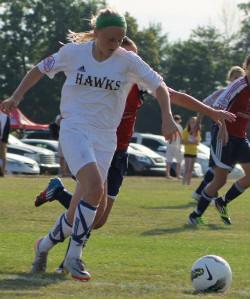 An aggressive player who thrives up front, Madeleine Lucas sees a lot of potential in Northwestern’s soccer team. That was one of many traits that influenced her to make a commitment to the Big Ten school.

“I see Northwestern's soccer program improving over the next couple years,” she told TopDrawerSoccer.com. “Also the school is very highly ranked for academics, it is close to home (Michigan), and it is in the Big 10 Conference.”

Head coach Michael Moynihan is currently in the second year of trying to transform the Wildcats into a Big Ten contender, and Lucas likes what she’s seen from the future recruiting classes.

“They have two new coaches that are recruiting high level players and are trying to create a very technical team,” she said.

While Lucas is the first ranked commitment for Northwestern’s 2016 recruiting class, the 2015 class features ranked recruits like Hannah Davison (No. 30), Marisa Viggiano (No. 65) and Jenny Haskell (No. 93).

A midfielder who enjoys pulling the strings in the offense and is comfortable with the ball at her feet, Ohio University ticked a lot of the boxes that Macey Juguilon

“I wanted a school closer to home and when I went for my visit I fell in love with the coaches and campus,” she told TopDrawerSoccer.com. “It was beautiful. I had that gut feeling they say you're supposed to have when you find the school.”

Strong encouragement from the program’s coaching staff assured her that the transition to the Division I college game wouldn’t be too difficult either.

“I like that coach Aaron Rodgers and coach Allison Whitworth like the style I play and that I will fit into the culture of their upcoming program,” Juguilon said. “I like that they see me playing in the midfield for them. I'm excited about the future of the program and how I can help make a difference.”

Juguilon was also excited about the school’s campus and the opportunities it offered in the classroom.

“It's the perfect fit and size for me I felt comfortable there,” she said. “I love nature and outdoor activities and Ohio has all those things that made me love it. I am excited to get my undergrad degree in biology.”

Goalkeeper Heather Rolls (Michigan Hawks) committed to Georgetown for the class of 2014.

Forward Mikayla Flores (Legends FC) committed to Texas for the class of 2014.

Forward Madison Lyons (Sparta United – UT) committed to BYU for the class of 2014.

Midfielder Jamie Brunworth (Colorado Rush) committed to Miami (FL) for the class of 2015.

Goalkeeper Rachel Ashworth (Mississippi Fire) committed to Memphis for the class of 2014.

Defender Karly Kliever (Challenge SC) committed to Central Arkansas for the class of 2014.

Defender Julia Taffuri (Sereno SC) committed to Massachusetts for the class of 2015.

Defender Sarah Cobb (Strikers FC) committed to Brown for the class of 2014.

Defender Anne Morgan (Internationals SC) committed to Navy for the class of 2014.