A creative midfielder who can excel in both holding and attacking roles in the middle of the park, Eleanor Pratt likes to create chances and clean them up in front of her team’s 18-yard box. 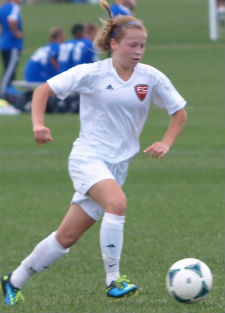 The Louisiana native quickly took to Navy, a successful women’s program under head coach Carin Gabarra, thanks to a strong reminder of her residence.

“I loved Navy from the first time I visited Annapolis because it reminds me of my hometown of New Orleans,” Pratt told TopDrawerSoccer.com. “Everything about Navy made me decide that it was the right place for me. The beautiful campus, the coaching staff, the amazing athletic facilities and the academics are all top notch. After visiting the campus and spending time with students, players and coaches, it cemented my decision. I knew Navy was the perfect fit for me.”

While plenty of Pratt’s decision originated from the homey feel of the area, the program did its part, starting with the team’s coaching staff.

“Coach Carin and coach Rob [Blanck] made it easy for me to talk to them and made me feel as if they were already my coaches,” she said. “I got to know them well over the recruiting process and when I visited, everyone was so welcoming and made me feel at home. Throughout my visits I was impressed with the strong sense of team amongst the players. Not only have coach Carin and coach Rob built a strong women’s soccer program, more importantly, they are committed to developing their players into great students and great individuals.”

Attending the Naval Academy obviously includes the service aspect of it as well, but Garbarra and Blanck smoothing over any doubts that Pratt had about that element of her commitment.

“Obviously, the decision to commit to Navy comes with an obligation beyond the four years playing soccer,” she said. “Coach Carin and coach Rob were instrumental in answering all of my questions and allowing me to see that I can and should challenge myself not only as a soccer player and a student, but as a leader. I am looking forward to my four years in Annapolis and then medical school and after that, wherever Navy takes me.”

From the beginning of her recruiting search, Krista Hinchman had a first idea of where she’d like to play her collegiate soccer.

It was a path that eventually led the Pennsylvania native to a Maryland school that has recently shifted into her ideal conference.

“I knew early in the recruiting process that I wanted to play at a Patriot League school because of the emphasis on stellar academics and commitment to high-level soccer,” Hinchman told TopDrawerSoccer.com. “Loyola really stood out because of the coaching staff. Naomi brings a lot of experience to Loyola from Georgetown and has an amazing level of energy and enthusiasm. Adding Stephen McKenna and Jim McGirr as top-level coaches also shows Loyola’s strong support for the program. The coaching staff’s approach to the recruiting process was refreshing and really convinced me that I wanted to play for them.”

Hinchman, a technically proficient attacking center midfielder for her FC Europa Storm club side, said that the soccer program is a perfect match for her.

“Having just recently joined the Patriot League, the program is growing and getting used to the different schools in the league,” she said. “So, there is a sense of being part of a new era in the program and the opportunity to impact the direction that it goes. The Ridley Athletic Complex is truly state of the art and it will be exciting to play there.”

Academically, the school had what she was looking for her as well.

“Loyola particularly stood out because of its emphasis on a broad liberal arts curriculum, strong science programs and its location in Baltimore,” Hinchman said. “I also like the fact that the Patriot League competes against schools that are geographically close, so that travel and impact upon classwork is minimized. Also, Loyola has a long history of supporting it athletic teams, so that you can really feel the school spirit when you visit campus.”