Simply stepping on campus can help make a player’s mind up about picking a particular school, and that’s what helped Nicole Niro eventually decide on heading to the Southeast. 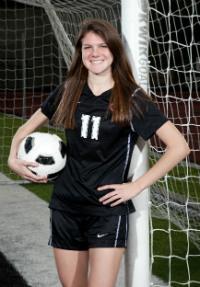 “I fell in love with Auburn during my unofficial visit,” she told TopDrawerSoccer.com. “The school is strong academically and has a great soccer program. The people there are so warm and friendly, I felt like part of the Auburn family during my very first visit.”

It’s more than just the aesthetics of the campus, of course, that ultimately draws a top talent somewhere, as the team on the field has to offer something. And Niro liked what she saw from the Tigers.

“The athletic facilities there are truly incredible,” she said. “Auburn played for the SEC championship for the last two years in a row, and I know that Auburn has some great recruiting classes, so the team should be strong for years to come. During my visit I got to watch Auburn play Alabama. That was fun and exciting.

“More importantly, Coach Karen Hoppa is not just a great coach, she is an amazing person too. She seems to instill good values in all her players. She will be a great role model for me in college.”

Heading far from home is an easier decision to make for some, it’s just one small part of the complicated and lengthy college recruiting process for the nation’s elite girl talent.

Ultimately, Kerry Manion thought that heading to New York City and committing to Columbia was the right move for her.

“I decided to commit to Columbia because it fit my criteria for what I wanted in a college experience,” she told TopDrawerSoccer.com. “I was looking for a school that offered some serious academic challenge, a competitive soccer program, and coaches that cared about me as a person, not just a soccer player.”

With regards to Columbia’s soccer program, the coaching staff appeared to play a prominent role – to no surprise – in helping Manion come to a point where she felt right committing to the New York school.

“Coach [Kevin] McCarthy and Coach [Werner Dasbach] are great people and awesome coaches,” she said. “They understand the game and I think my style of play matches the way they coach. It’s a perfect fit. They will challenge me – on and off the field – and I am blessed to have the opportunity to play for them at Columbia.”

A midfielder who likes to control the game through the middle of the field, the ACC lure played a prominent, but far from main role in Megan O’Connor’s decision-making process.

Of course, things like the coaching staff and challenge of playing against ACC competition also drew her to the Tigers.

Midfielder Katie Glenn (Lonestar SC) committed to Texas for the class of 2015.

Defender Emily Tucker (Revolution Empire) committed to Navy for the class of 2013.

Defender Paige Welch (Lonestar SC) committed to Oklahoma for the class of 2015.

Midfielder McKenzie Oliver (Lonestar SC) committed to TCU for the class of 2015.

Midfielder Claudette Lassandro (Lonestar SC) committed to Texas A&M for the class of 2015.

Midfielder Kayla Jennings (Matchfit Chelsea) committed to Maryland for the class of 2015.

Midfielder Karly Stuenkel (Eclipse Select) committed to Iowa for the class of 2014.