A hard-working midfielder on a prominent Illinois club, Sarah O’Connor is unique in that when she suits up for her high school squad, she plays in goal. 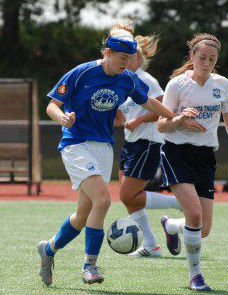 And while finding a program that would recruit her as a goalkeeper played a role, her commitment was largely fueled by the opportunities she saw for herself in the classroom.

“I decided to commit to eastern Kentucky because the first thing I look at is academics, I plan on majoring in Criminal Justice and they have a fantastic program,” she told TopDrawerSoccer.com.

That’s not to say that she didn’t do any research on the soccer team, of course. When she started in that direction, she also found something to like, including the coach’s willingness to play her between the posts.

“After I was pleased with the academics I looked further into the coaching staff, coach Barnes is a fantastic woman and made me feel right at home on my visit,” O’Connor said. “Coach Barnes was also understanding about me playing as a goalkeeper which helped my decision tremendously. The campus was just the right size for me and I was so comfortable there. Everything at Eastern Kentucky was what I imagined college would be like as a child and it was almost like a missing puzzle piece I found that fit perfectly.”

As soon as Callyn Loughrey stepped on campus, she knew that this would be the right fit.

The Big South program had everything the midfielder was looking for in a future college home, on and off the field.

“I decided to commit to High Point because I wanted to go to a smaller private college with strong academics and a good D1 soccer program,” she told TopDrawerSoccer.com. “After visiting High Point, I fell in love with the beautiful campus and really liked Coach Beall, Coach Fontaine and current players that I met.  It just felt like a perfect fit for me.”

Loughrey originally got an idea of what the coaching staff was like during an ID camp she attended, and from there the other pieces started to fall into place.

“Coach Beall and Coach Fontaine created a great family atmosphere that was very encouraging and positive,” she said. “The soccer program is getting better and better every year and I am excited to be a part of it.”

Considering her background with the Georgia State coaching staff, it was no shock to see Monique Hundley verbally commit to the program.

Coaches Derek Leader and Malorie Rutledge are in charge of the region’s ODP team, and the already forged relationship made her decision a fairly straightforward one.

“I really like the detail and their overall approach to the game,” Hundley told TopDrawerSoccer.com. “I really enjoy playing for them. They remind me a lot of the way my club coach, Willie Davis coaches us and works with individual players to help them continually improve and develop. I think they are building what will be a very competitive Division I team.”

The Louisiana native didn’t want to stray too far from home, though that was a decision relating more to climate than anything else. And the nature of the city campus was daunting, but ultimately helped draw her in as well.

“I really didn't know what to expect of Atlanta and was a little apprehensive because GSU is in the middle of downtown Atlanta,” she said. “But when I visited and got to see the campus and how it is like its own city within the city, I was very comfortable. The facilities are modern and very nice. The dorms are great, like apartments and I immediately made friends with some of the girls already on the team, they were very accepting.”

Midfielder Madison Morris (TSC Hurricane) committed to the Missouri University of Science and Technology for the class of 2014.

Goalkeeper Samantha Moreno (Beach FC (CA)) committed to ULM(w) for the class of 2014.

Midfielder Shelby Gillespie (Ohio Galaxies FC) committed to Toledo for the class of 2015.

Defender Kate Summers (Dallas Sting) committed to Texas Tech for the class of 2015.

Midfielder Claudia Day (Birmingham United SA) committed to Samford for the class of 2014.

Goalkeeper Elena Naccari (Mandeville SC) committed to University of Dallas for the class of 2014.

Defender Lauren Johnson (Match Fit Academy) committed to Lafayette for the class of 2015.

Goalkeeper Sarah McDonald (YMS) committed to McDaniel for the class of 2014.

Forward Samantha Tran (De Anza Force) committed to Stanford for the class of 2016.