With players on her U16 De Anza Force team already committed to top schools like Stanford, California and Maryland, Alyssa Fagel’s verbal to play at Yale adds another prestigious program to that list. 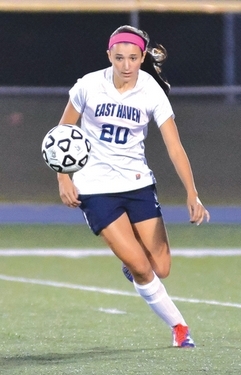 The school first stood out to her because of the coaching staff.

“The coaches showed a lot of interest in me right from the beginning, which was very appealing,” Fagel told TopDrawerSoccer.com. “When I went on my unofficial visit, I fell in love with everything about the school and its soccer program. The soccer facilities are phenomenal and the school itself is gorgeous.”

As she got to know the team and the program, it became clear to her that everything about the soccer at Yale provided the right fit for her, including the school’s possession approach, which paralleled her club experience.

“I loved the vibe I got from the team when I visited,” Fagel said. “Everybody seemed to get along and truly care about one another. I also loved the coaching staff. Two of the coaches – head Coach Rudy Meredith and coach Todd Plourde – have been working together for almost a decade and it was obvious how well they understood each other both on and off the field.”

The Ivy League and academic element of an institution like Yale sealed the deal.

“There is a perfect balance of academics and athletics,” Fagel said. “Academically, Yale is one of the top schools in the country and the soccer program, with experienced and supportive coaches and teammates, is exactly what I wanted.”

To find the right college fit, New England native Megan Kikosicki didn’t have to look outside the region, ultimately committing to an America East program for 2016.

During a visit, it didn’t take her long to realize that New Hampshire was the right place to continue her playing career.

“From the moment I arrived on campus, coach Steve Welham made me feel welcomed and comfortable,” Kikosicki told TopDrawerSoccer.com. “He made it very clear what his vision and strategy for the program is and how I fit into it. “

The Connecticut native is eager to move slightly further north in the not too distant future.

“The campus is absolutely gorgeous and a great place to go to school,” Kikosicki said. “I am really excited to be a Wildcat.”

Midfielder April Ficarrotta (Heat FC) committed to Northwestern State for the class of 2015.

Goalkeeper Randi Palacios (FC Virginia) committed to Connecticut for the class of 2016.

Midfielder Nicole Roseland (Florida Kraze/Krush) committed to Western Kentucky for the class of 2015.

Defender Amanda Visco (PDA) committed to Rutgers for the class of 2016.

Defender Sophia Serafin (West Coast FC) committed to Stanford for the class of 2017.

Forward Frankie Tagliaferri (PDA) committed to Penn State for the class of 2017.