A midfielder and member of the U17 Canadian World Cup team, Avery Lakeman next has her sights set on the Pac-12. 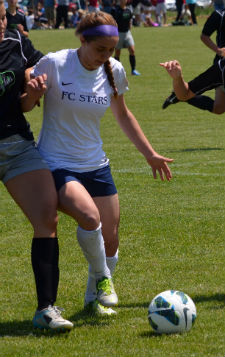 “I decided to commit to California because of the coaching staff who have made me feel like family already,” Lakeman told TopDrawerSoccer.com. “The school has a long history of academics and student involvement, which is very appealing to me. I feel like it is a place where I will grow as a soccer player, a student, and a person.”

Lakeman enjoyed her experience with the U17 WNT squad over the past year, which included competing in this year’s World Cup in Costa Rica.

“My experience with the Canadian youth national system (u17 world cup squad) has been amazing. It was a chance to learn and grow from great coaches as well as the great players that you are playing beside on a daily basis. Being able to play for my country in a world cup has been the greatest honor and something that I would hope to experience again.”

Along with head coach Neil McGuire and the rest of the staff, Lakeman is eager to play soccer at a high level, both in practice and in games.

“I liked the competitiveness of the Cal squad with the players that the program attracts as well as the high level competition that Cal plays regularly which I think is needed to progress to the next level as a player,” she said.

Academics and location also drew her to the university.

“The University of California has appealed to me for a long time because of the variety of courses available, student activities and involvement in social justice.” Lakeman said. “I also like that the campus is close to San Francisco, which is a vibrant city. Cal being a west coast school is also a huge bonus as it makes it easier for my family to come visit and catch a few games.”

Speed is an asset every team searches high and low for, and in Rachel Kingston, the Boston University squad has added a potential attacking weapon down the road.

A variety of reasons pulled her commitment to the local school.

“At the beginning of the recruiting process I didn't know if I wanted to stay close to home or go far away and the  more I thought about it I knew  staying close was important to me, so that my family could be there to support me and watch me grow as a player,” Kingston told TopDrawerSoccer.com. “The academics alone make BU a great school. They have so many great majors and programs that are going to give me the best opportunities after college.”

The academics were a big piece to the puzzle for Kingston’s commitment, but that doesn’t mean the soccer team wasn’t a factor.

“I absolutely love the soccer program BU has,” she said. “It’s a really positive atmosphere and you can tell that everyone involved there really enjoys it.  All the players want to continue to grow and learn and take the program to the next level. I feel like its a real team feeling there and every player puts the team before themselves which was really important to me. Coach [Nancy] Feldman is a fantastic coach and knows how to develop top players. I also think my style of play will fit in with theirs making it a perfect match.”

Going to school in the heart of Boston was yet another strong pull.

“Although it is a city school it’s confined to two miles along Comm. Ave and just a beautiful campus,” Kingston said. “The school also emphasizes that we’re a student before an athlete, which was really important for me because I am there for an education before being an athlete. At the same time they give athletes the best facilities and everything they need to be successful on the field.”

Goalkeeper Lauren Roussell (Birmingham United SA) committed to Auburn for the class of 2016.

Defender Remi Roberts (Charlotte Soccer Academy) committed to Charlotte for the class of 2017.

Forward Aminata Kalokoh (Strikers FC) committed to Stanford for the class of 2016.