A shot-stopper from New York, Phallon Tullis-Joyce wants to be a Marine Biologist.

That quest, along with the desire to compete at the highest level of Division 1 soccer, helped her decide to make a commitment to Miami (FL) for the 2014 season. 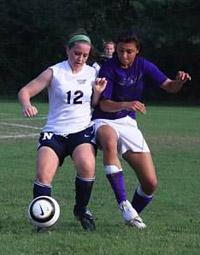 “I was so impressed with Coach Tom’s core belief and mission,” Tullis-Joyce said. “I felt their dedication to the team both academically and athletically. He strives to bring out the best in each one of his players, including goalkeepers.”

For someone from New York, there was also the appeal of living in sunny South Florida, particularly during the winter months of the year.

“The campus itself is gorgeous and with the new constructions that have begun, you could not help but love it,” she said. “How can you beat studying in a hammock during finals week in December! Even though athletics will obviously play a major role in my collegiate life, it was very important to make sure that I was going to be happy on campus when not playing soccer.”

A player who was always chasing the dream of competing in the ACC, midfielder Julia Moore found an accommodating program in Maryland.

“Maryland has a history of great athletics and really supports their soccer,” Moor told TopDrawerSoccer.com. “I committed to Maryland because I will continuously improve and succeed as a soccer player and as a student. I also love the location, of the Mid-Atlantic, I enjoy the cold weather.”

Moore’s excitement at joining the program was evident, and she heaped praise upon head coach Jonathan Morgan and the rest of his coaching staff about their approach to the game.

“The coaches are incredible,” she said. “Coach Morgan is very enthusiastic and is committed to making the team and players better than they already are. The coaches care about the details of every aspect of the game. I like their style of play, the way they keep possession and attack from all sides. I know I will fit in at this program, with these coaches.”

A hard-working defensive midfielder, Ashlee Burke is a ball-winning player who is looking forward to take her game to Marist.

“I decided to commit to Marist because academically and athletically Marist was the perfect fit for me,” she said. “My dream was to attend a Division 1 school with a highly competitive soccer team and great academics; Marist fulfilled both of those dreams.”

The soccer program, MAAC champions in 2011, was also a great draw, along with the school’s campus along the Hudson River.

“After researching their program and interviewing with their coaching staff, I felt a strong connection with the head coach,” she said. “I feel that Coach [Kate] Lyn will be a great inspiration for me to succeed on this team. I am confident that I will be able to contribute to the program and greatly benefit the team.”