A long list of reasons drew Ciara Donnelly to make her commitment to SEC program Mississippi State: Coaching staff, academics, the campus. But hope for the future was another big reason, as Donnelly thinks that when she arrives to play in 2016, things will be a lot different.

“Coach Aaron Gordon and his staff began rebuilding the program during their first season at Mississippi State, and they plan to continue to grow and become more successful in the next few years,” she told TopDrawerSoccer.com. “I'm excited to join their program in a few years because I know I'll be in a competitive environment that will help me grow both as a player and an individual. Both the staff and players have a firm worth ethic, and their overwhelming hunger to be better every day ultimately led to my decision to commit to Mississippi State.” 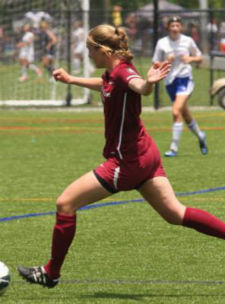 Donnelly is eager to compete in the competitive – and perhaps slightly underrated – cauldron of the SEC, a conference that has made strides of late. A positive interaction during one of her visits reassured her thinking.

“The staff and the team were very welcoming and made me feel comfortable when I visited the campus,” she said. “I was able to get a real sense of the environment they played and trained in, and it was definitely something I wanted to be apart of. What impressed me the most was the amount of support the players have athletically and academically that helps them to be successful on the field and in the classroom. Overall I think that the coaching staff, competitive environment, support structures, and the team goals for future seasons made a strong impact on my decision.”

MSU’s backdrop was another draw for the Dallas Metroplex native.

“The school is located in a college town, and it was environment that I felt most comfortable in,” Donnelly explained. “The campus is beautiful and the student population is a perfect size in my opinion at about 20,000 students. There is a small student to teacher ratio, so I can be confident that I'll receive a great education. I immediately knew when I stepped on the campus that it was somewhere I could see myself in two years.”

Sometimes when it comes to luring recruits, coach can simply wait for a player’s sibling to come through.

That’s more or less what happened with Margaret Anne Schmidt, who recently committed to Texas A&M, where her sister Mary Grace played from 2009-12. Margaret Anne’s exposure to the program during that time triggered her interest in choosing College Station.

“For the past four years while my sister was a member of the A&M team, I fell in love with the soccer program and the school,” Schmidt said. “So when it came time to visit other schools, I was always comparing everything to A&M. They have the best fans in the nation, even for soccer, which is not common at a lot of schools. The coaching staff and facilities were amazing and the campus was beautiful. In the end, I fell in love with Texas.”

Part of picking a Texas program was also instigated by a desire to leave California, increasing the likely hood of her following in her sister’s footsteps at an out-of-state program.

Another bonus to the connection was Margaret Anne already knew Coach G Guerrieri and the rest of the staff very well.

“The coaching staff and team felt like family,” Schmidt said. “One of the big things for me was how competitive the soccer was. I wanted to go to a program that would challenge me in everyway possible and would build me into a better player and person and A&M was the perfect fit.”

Schmidt is the eighth commitment to Texas A&M for the class of 2015.

Defender Cassidy Coates (SWISA) committed to Hanover College for the class of 2014.

Midfielder Madison Soileau (Challenge SC) committed to Houston for the class of 2016.

Midfielder Lea Waddle (Eclipse Select) committed to Vanderbilt for the class of 2016.

Forward Aimee Manley (FC Bucks) committed to Saint Joseph's for the class of 2015.

Defender Alexie Marietti (SoCal Blue) committed to Cal Poly for the class of 2015.