Girls Commitments: Another for California It’s still very early in the recruiting race for 2017, but Cal continues to stay ahead of the pack on the heels of a number of top recruit committing to join the program in a few years. 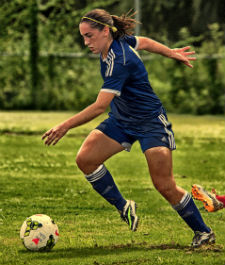 The latest is Kai Henderson, who had her pick of top programs, eventually settling on the Berkley program.

“Everything from the high academic standards to the great athletic tradition, as well as the beauty of the Bay area were all perfect fits for me,” Henderson told TopDrawerSoccer.com about her decision.

An attack-minded player looking to possess the ball on the field, she can play a number of different spots on the field.

“From the start I felt very comfortable with coach McGuire and whole Cal staff,” Henderson said. “The style of play suits me, the facilities are amazing, and I am extremely excited about being a part of an incredible 2017 recruiting class. I feel like we'll be able to contend for a national championship.”

Henderson also liked the campus and the opportunities in the classroom.

“The Cal campus is beautiful and the academics are world-renowned,” she said. “Culture and diversity were very important to me when searching for a school, and Cal fit that perfectly. Cal is just an all around cool place to go to college while having an amazing athletic and academic experience.”

Eight players are committed to join California in 2017.

The combination of a top 10 soccer program and high quality academics appealed to Haillie Lower during her college search, and the Florida native opted to commit to the SEC power.

The team’s approach on the field appealed significantly to the West Florida Flames standout.

“I like that head coach [Becky] Burliegh coaches her players to play possession oriented attacking soccer,” Lower told TopDrawerSoccer.com. “The team uses its center midfielders as a key to its play; which is my favorite style of play. Florida coaches liked the versatility, technical skill and physicality I showed while playing holding-mid and center back on WFF U17G ECNL, a top 10 team in goals against last season.”

Aiming to develop and further herself as a player, Lower was also looking for a program that tested itself against the nation’s top schools.

“I want to play with the best and against the best, I can do that at Florida, one of the few programs to win an NCAA D1 Women's soccer championship, with long history of success in a top soccer conference the SEC,” she said. “I plan to major in Chemistry and Florida's program is one of the best in the country.”

Staying close to home was also a bonus.

“I could not be more excited to be heading to such a great school, which is less than two hours from home,” she said.

Lower is the third commitment to Florida’s 2016 recruiting class.

Midfielder Camryn Dyke (Colorado Rush) committed to Notre Dame for the class of 2017.

Midfielder Emily Ramos (Colorado Storm) committed to Regis for the class of 2016.

Midfielder Alyssa Malonson (Challenge SC) committed to Auburn for the class of 2017.

Midfielder Raven Sweeney (So Cal Blues) committed to Washington State for the class of 2016.

Midfielder Isabella Blackman (Iowa City Alliance) committed to Iowa for the class of 2016.

Defender Diane Senkowski (Michigan Hawks) committed to Iowa for the class of 2017.