A player with a unique background, Penelope Edmonds has experience few players her age can replicate.

The Australian-American has been in camp with the Australian U20 team, capped at the U16 and U17 age groups, and last season trained with the full women’s side during their tour of the United States at the end of 2012. 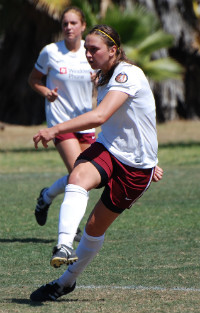 “I decided to commit to Stanford because for me it offers the best of both worlds,” she told TopDrawerSoccer.com. “I wanted to go to a school that offered rigorous academics as well as a top soccer program, and Stanford does just that. I felt it was the right fit for me minutes after stepping on campus, and really bonded with the girls and coach [Paul] Ratcliffe, coach [Jay] Cooney and coach [Nicole] Van Dyke.”

The location also appealed to her, as she jumped at the chance to swap coasts from her current New York locale.

“Coming from the Northeast, I have always dreamed about living in California and the campus reminds me a lot of Australia, where my parents are from and where all my relatives live,” she said. “Plus who doesn't love the beautiful weather.”

A player with lofty ambitions – Edmonds aspires to play in a World Cup, Olympics and hopefully capture a national title while playing college soccer – the net minder found the right level that she hopes will help her develop as a player.

“Stanford has a very intense and competitive soccer program and that is the kind of environment that I want to play in,” she said. “In the training sessions I watched, the girls were not only working diligently to improve, but they were having fun doing so. I really like their style of play and their approach toward the game. I felt like I could really connect to the coaches, especially the goalkeeping coach Jay Cooney and I felt as if we thought about the game the same way.”

At the start of her sophomore year of high school, Brianna Westrup decided to hang up her water polo cap. The multi-sport athlete realized that soccer was her true passion.

“I was surprised at how quickly I was seriously considering college programs,” she told TopDrawerSoccer.com. “My focus was on finding a top rated school for both academics and women’s soccer, regardless of location."

The Southern California native had done her homework. She watched college soccer, talked with older players and visited different campuses in search of what “felt right.”

“My visit to UVA was unforgettable,” she said. “Walking through a school with so much history took my breath away. The girls were welcoming and fun. Coach [Steve] Swanson, coach [Ron] Raab and the whole coaching staff made it an incredibly positive experience. I left feeling very excited about the program and school.”

Brianna also feels fortunate to have had the guidance and support of her Slammers Club coaches.

“George [Larsen], Walid [Khoury] and Ziad [Khoury] spent time answering my questions and helped me through the recruiting process.  They are so knowledgeable.

“Keeping in mind my goal of competing at the highest level during and after college, I was thrilled to commit to the University of Virginia and look forward to being a Cavalier.”

A hopeful for the U.S. U17 WNT World Cup squad next year, Jazmin Jackmon sorted out her college future by finding the right program.

“I decided to commit to Santa Clara University because I feel it is the university that fits my personality the best,” she told TopDrawerSoccer.com. “It's not too large and the community is very comforting.”

A tenacious and hard-working defender, there was a long list of aspects of the soccer team that caught her eye.

“What I like about the soccer program is that it has been very successful and the staff is very supportive and loving,” Jackmon said. “I am glad that I will be able to contribute to the success of the D1 team.”

Midfielder Madison Lewis (Carmel United) committed to Missouri for the class of 2015.

Midfielder Nicole Seaman (SC Del Sol) committed to Tennessee for the class of 2015.

Forward Kayla McCoy (Eclipse Select SC) committed to Duke for the class of 2015.

Forward Anika Rodriguez (So Cal Blues) committed to UCLA for the class of 2015.

Forward Keri Cavallo (Albertson SC) committed to Yale for the class of 2015.