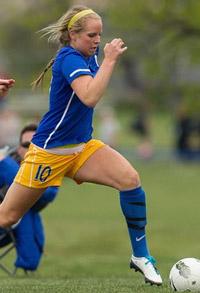 Big Ten women’s soccer may not get the same plaudits of other conferences, but there is quality in abundance.

Look no further than the job Greg Ryan has done at Michigan, which is something that didn’t escape the notice of recent verbal commit Reilly Martin.

“Being able to play for Michigan is a really great fit for me,” Martin told TopDrawerSoccer.com. “I truly loved my campus experience and the camaraderie of all of the women soccer players. They made me feel so at home, and I can tell they have great team chemistry. Knowing I was making a four year commitment, two years from now, I had to rely on the signs of team chemistry (which comes from great leadership) and a comfort level in playing for a coaching staff that has worked hard to get to know me.”

Ryan, former head coach of the Women’s National Team, is someone that Martin is familiar with, and his presence obviously helped influence her in making the decision.

“Having the opportunity to play for coach Greg Ryan is something that I have wanted to do since he coached me in an ODP Interregional Event,” Martin explained. “I really enjoyed his style and approach to the game. He has tremendous experience at the highest levels, and I am really excited about the direction of the Michigan program not only in the Big Ten Conference but also nationally. Coach Ryan and his staff are all first class and they will help me be a better player and a positive contributor to their team.”

Providing icing on the cake for the youngster from Indiana was the school’s reputation in the classroom.

“The University of Michigan is such a strong academic school with a far-reaching reputation,” Martin said. “I knew that being able to get my undergraduate degree from U of M is an opportunity I could not pass up and it is something that will help me for many years to come. The support they provide for the student athletes is truly exceptional and couple that with great training facilities, a really beautiful campus, and the town of Ann Arbor. I knew this was the place for me.”

The excitement of Kayla Murphy in joining a Big Ten program was quite palpable indeed.

“I am excited to be a part of Indiana’s 2014 recruiting class and eager to contribute to the process of establishing Indiana women’s soccer as a nationally competitive program that will eventually mirror the success of the IU men’s soccer program,” Murphy told TopDrawerSoccer.com.

Those are lofty expectations and ambitions indeed, but the striker and native of Indiana expressed her determination and desire to help move the program forward when she starts school in a little more than a year.

“I definitely intend to give everything of myself necessary to make an impact on the field and help the Hoosiers compete for a Big Ten conference title and earn a spot in the NCAA tournament right away,” she said. “Indiana is a Top 25 school academically and I definitely am excited play a part in helping their women’s soccer program become a Top 25 program as well.”

Murphy did look at programs outside her home state, including Clemson, Ohio State, Purdue and Michigan, along with several other mid-major schools. A recent visit to Bloomington sealed the deal, however.

“Indiana’s athletic facilities are awesome and their academic support system for scholarship student athletes is unbelievable,” she said. “The Indiana University campus in Bloomington is beautiful and is only 2 hours from my home in Newburgh.”

Familiarity with some of the players on the squad didn’t hurt either.

“I already know a few of the current IU players from high school and club soccer and I really like all of the new girls I met,” Murphy said. “Every one of the IU girls that I talked to had a really positive attitude and enthusiasm about working hard to achieve something special as a team and I can’t wait to be a big part of that because winning matters to me.”

Forward Mia Hoen-Beck (McLean Youth Soccer) committed to Stanford for the class of 2015.

Midfielder Caroline Dreher (Ohio Premier) committed to Indiana for the class of 2015.

Defender Callie Allen (Freestate SA) committed to Elon for the class of 2014.

Forward Abbie Boswell (NSA Premier) committed to Ball State for the class of 2015.

Defender Whitley Cargile (Brentwood SC) committed to the University of Chicago for the class of 2014.

Forward Kelsey Horst (FC Bucks) committed to Siena College for the class of 2014.