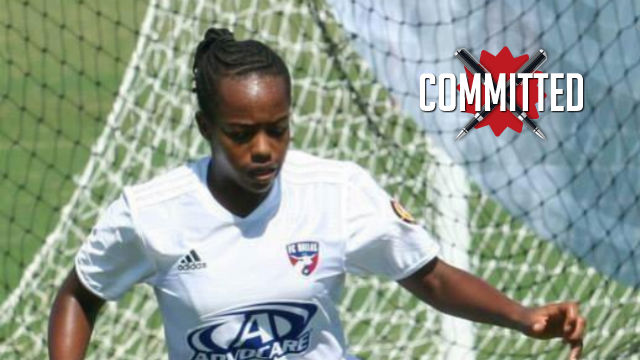 An aggressive, physical and athletic defender on a strong FC Dallas ECNL side, Jada Holmes found the right place for her at SEC power Kentucky.

“It was a perfect fit for what I wanted both athletically and academically,” she told TopDrawerSoccer.com. “I really loved the environment coach Jon [Lipsitz] has created with his team and coaching staff. As soon as I left campus, I knew it was the place I was meant to be. They showed me in a number of ways that not only did the soccer program want me, but the whole school wanted me." 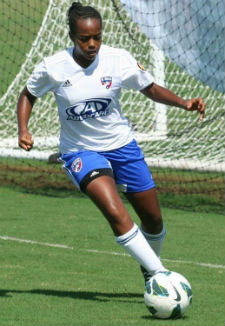 Holmes said that she liked the team’s style of play, the family-like environment at the team, not to mention the connection she saw between coach Lipsitz and his players.

Away from soccer, Kentucky met her academic ambitions as well.

“I'm interested in Physical Therapy, and they have four hospitals on campus and great medical programs to choose from in both undergraduate and graduate school,” Holmes said. “It impressed me that although the school is known for its basketball team, they also invest in the whole university with new dorms, academic buildings, and a big investment in their soccer program as well.”

Holmes is the fourth verbal commitment to Kentucky for the class of 2016.

A native of Grand Junction, Colorado – a small town the border of Colorado and Utah – Baseley McClaskey has made numerous sacrifices to get to the point of attracting college interest.

She spends five hours in the car to get to the nearest ECNL club, and spent a year at the IMG Soccer Academy in order to hone her skills. Along the way, colleges started showing interest and she recently committed to a prominent power.

“I have since visited countless schools and nothing has compared to Florida State,” McClaskey told TopDrawerSoccer.com. “It just feels right. I chose FSU because I love the atmosphere and the energy of the campus, the facilities are second to none and the success and tradition of FSU soccer is something I want to be a part of. The opportunity to train with some of the best soccer players in the country and to be coached by one of the best coaches is a dream come true.”

McClaskey’s unusual journey has instilled a work ethic in her that she’ll take with her to Tallahassee.

“I have learned that with hard work and sacrifice you can achieve your goals no matter the obstacles,” she said. “I can't wait to be part of such a great university and soccer program.”

Florida State currently has six verbal commitments reported for the class of 2016.

An attacking midfielder who looks for gaps in transition, Nancy Ingham found the right school for her in the Division III ranks.

“Centre College is one of the top liberal arts schools in the nation. It has a great reputation and the people are so friendly,” Ingham told TopDrawerSoccer.com. “I know I will get a top-notch education and be able to compete in soccer at the highest level.”

Ingham was drawn to the soccer program because of its ability to contend, having made the NCAA tournament three years running, while winning Southern Athletic Association championships.

The midfielder sees the team as a chance to also improve significantly as a player.

“Coach Hoffman focuses on the technical aspects of the game and I think I will be a much better player with his coaching,” Ingham said. “All the girls are welcoming and it is such a warm and friendly environment.”

Forward Megan Glass (OP Eagles) committed to Ball State for the class of 2015.

Defender Sarah Trissel (San Diego Surf) committed to Georgetown for the class of 2016.

Midfielder Ashley Kreinbring (Orlando City) committed to Eckerd for the class of 2016.

Midfielder Jalen Woodward (Crossfire Premier SC) committed to USC for the class of 2016.