An attacking midfielder who likes to look to create goals or score them herself, Mia Corbin’s college search had specific criteria. She wanted to play in a strong conference, a program known for player development and to stay on the west coast. 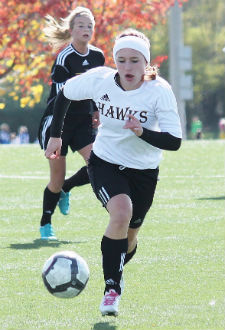 The led her to commit to California, as she also liked head coach Neil McGuire and the way he approaches the game.

“I liked the coaching style at Cal and aggressive style of play the offense ran,” Corbin said. “I feel my game will fit what they do.”

A standout on her Pacific NW club side, Corbin wasn’t too daunted by the prospect of traveling south away from family for college either.

“Going to college in the Bay Area is away from my home in Maple Valley, Wash. but close enough for my parents to travel and see my games,” she said. “The school is one of the top academic institutions in the country and getting a degree from Cal will be awesome.”

Corbin is the second commitment to California for the class of 2016.

“I decided to commit to Purdue because it has great academic excellence,” Riley told TopDrawerSoccer.com. “Once I got to the school I immediately felt like part of the school and the soccer team. The girls were very welcoming and I'm very excited to call myself a Boilermaker along side them.”

Riley liked the soccer side of things as well, due to the school’s conference – not a surprise considering she resides in Big 10 country.

“I like the Boilermaker soccer program because they are a Big 10 school, this gives us the opportunity to compete against other high level soccer schools,” she said. “Their facilities are flawless and they take exceptional care of their players and field.”

Proximity to home was another plus as well, as Riley won’t leave her home state for school.

“I felt like the campus itself was gorgeous,” she explained. “It’s close to home which is very important to me. Another reason I like Purdue is because it's a very high level academic school that has a fantastic pharmacy program.”

The qualities that Alexandra Griffin saw in Western Illinois head coach Ted Flogaites, played a massive role in her decision to commit to the program.

“His positive attitude, dedication to the game, strong, strategic-minded soccer, and high expectations from his team were qualities that made him stand out as a college coach for me,” Griffin told TopDrawerSoccer.com. “He also has a tremendous sense of humor. I was fortunate to spend some time with the girls on the team and felt strong team chemistry, which is important to me as a player.”

A quick-footed midfielder for a quality Michigan Hawks side, Griffin also saw the high level of competition the program is striving for as a plus.

“I believe Coach Ted will be doing great things with this team,” she said. “Additionally, the strong focus on academics was important to me as well. Being on a team that has the highest GPA in Division I soccer is something to be very proud of.”

The school itself was also the perfect size for her.

“I wanted a larger university, as I come from a smaller, private high school, but not so large that I was just a number,” Griffin said. “The class sizes are smaller and the school has a reputation of great support and communications between the teaching staff and the student.”

Defender Sydney Witham (Eclipse SC) committed to Army for the class of 2015.

Forward Alexis Royal (Carmel United SC) committed to Wisconsin-Milwaukee for the class of 2015.

Midfielder Baseley McClaskey (Real Colorado) committed to Florida State for the class of 2016.

Defender Karen Baker (Michigan Hawks) committed to Belmont for the class of 2015.

Midfielder Megan Lawlor (FC Bucks) committed to Holy Cross for the class of 2015.

Midfielder Daria Petredes committed to USC for the class of 2016.