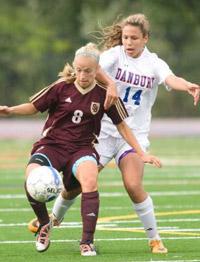 A forward with a lot of speed, Samantha Grasso likes to take players on and set up goals. The competitive striker will look to do the same at the collegiate level at William & Mary in the fall of 2014.

Her decision to head to Virginia was part of a long recruiting process.

“I originally attended a soccer camp at William & Mary over the summer,” Grasso told TopDrawerSoccer.com. “I enjoyed the camp and really liked the head coach, John Daly, and the assistant coach, Lorraine Quinn. I later came down for an overnight, allowing me to meet and spend time with the team. At the end of my visit, I had no doubt that William & Mary was where I wanted to go.”

It wasn’t the case of just going to a couple of camps and knowing that this was the right fit for her. Grasso also made sure to do her research, and noted that the Tribe often competes for conference titles like they have the past two years.

“I knew the Colonial Athletic Association was a strong conference and I know that William & Mary often competes for the conference championship,” she said. “After watching them play on two different occasions I enjoyed their style of play and envisioned myself playing and fitting in well.”

Of course, the attacker also knows that she’s going to also enjoy the benefits of getting a great education while competing for four more years in the CAA.

“William & Mary has a great academic program,” she said. “The campus itself is beautiful and gives a welcoming feeling. The brick buildings, ponds, bridges and tree lined pathways make it very appealing.”

Kaela Dickerman committed to Louisville for the class of 2014.

Margaret Rivera, a defender for Crystal Lake Force committed to Northern Illinois for the class of 2013.

Elizabeth Hutchison committed to UC Irvine(w) for the class of 2014.

Midfielder Andrewa Violanti committed to Wright State for the class of 2014.

Defender Jessica Wooldridge, a defender for Cedar River Soccer Association (Iowa) committed to Northern Illinois for the class of 2013.

Kimberly Burbank of Classics Elite, committed to Wyoming with the class of 2013.