A quick and aggressive defender, it became a slam dunk decision for Callyn Walton to make a commitment to the local power.

“After a number of unofficial visits to very strong schools across the south and southeast during the recruiting process, the option to remain close to home and play for my dream school, Texas A&M, was too great of an opportunity to pass up,” Walton told TopDrawerSoccer.com. “Born and raised in College Station, I grew up attending games and summer soccer camps at Ellis Field since I was four years old and know that the playing environment is like no other college soccer program in the nation.” 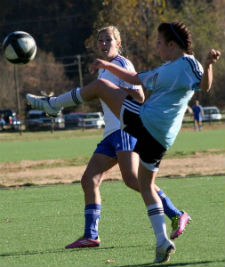 However, it was obvious that there was much more that went into the decision than simply picking the local team. What the program has accomplished on the field as well stuck out to her.

“With A&M only having been in the SEC for two years and already having an SEC Tournament Championship soccer title, the program’s success was a huge draw,” she said. “The team’s style of aggressive play and competitiveness on the field fits me as a player. Coach G was honest about the level of work and commitment that he and Coach Phil Stephenson require from their players. I thrive in this type of goal oriented, playing environment and really happy to play for a program that has such high standards for their players.”

Walton is looking forward to the opportunity to develop and improve as a player for A&M, and will be a third generation Aggie when she enrolls in the fall of 2016. She also knows that the school will set her up for success down the road.

“The academics are exceptional and the support that the university provides to their student athletes will allow me to reach my academic and future professional goals,” she said. “The community atmosphere is unbelievable in College Station. It’s my home and I am so thankful that I can remain here and contribute to the future success of Texas A&M Soccer.”

The defender is the first reported commitment to Texas A&M for the class of 2016.

Part of a large incoming crop of freshmen at High Point(w), Meredith Dunker is a creative and technical player who liked the school and soccer team’s vibe.

“I decided to commit to HPU because the coaches and players made me feel more at home than any other college I visited,” she told TopDrawerSoccer.com. “I can't wait to play the game I love in a gorgeous stadium with amazing facilities.”

The players already on the team fostered a family environment as well, and Dunker looks forward to competing and improving in a place like High Point.

“Through adversity and successes, together they inspire each other to always be better,” she said. “Going into the program, you have almost 30 best friends immediately."

It was also clear that the school impressed her quite a bit.

“High Point University is like no other college I have seen,” Dunker said. “The campus is so beautiful.  I will get a great education with a tremendous student body. The president of HPU is truly inspiring and cares so much about the students.”

Forward Melanie DaSilva (Scorpions SC) committed to Sacred Heart for the class of 2015.

Midfielder Maxlyn Foster (Lake Norman SC) committed to LSU for the class of 2014.

Midfielder Sierra Sisco (Vardar) committed to Louisiana Tech for the class of 2014.

Defender Mackenzie Kern (Cincinnati United Premier) committed to Centre for the class of 2014.

Midfielder Peyton Draper (Dallas Sting) committed to Smith for the class of 2014.

Midfielder Madilyn Donaghy (Waza FC) committed to Adrian for the class of 2014.

Forward Victoria Kealy (PDA) committed to Rider for the class of 2015.

Midfielder Nadia Hernanadez (Heat FC) committed to California Baptist for the class of 2015.

Defender Raevyn Bailey (Heat FC) committed to UNLV for the class of 2015.