Some players don’t look to in state schools when making a decision – other times, it plays a crucial role in a recruit’s choice. 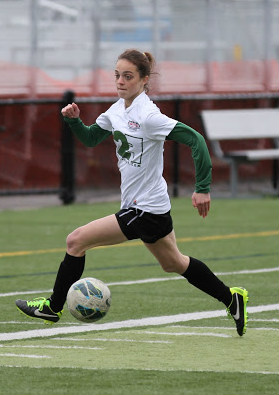 That seems to be the case with Sydney Van Steenberge, who didn’t think too long about her commitment.

“Committing to Oregon was an easy decision,” she told TopDrawerSoccer.com. “I loved the environment of the school and the team. The athletic facilities and the support the athletes receive was impressive. The best part is getting the opportunity to represent my state.”

Competing in the Pac-12 in women’s soccer is certainly going to be a tall task, with the chance to go up against the likes of Stanford and UCLA on a regular basis. But the team’s approach appealed to Van Steenberge.

“I really liked that the Ducks are serious about soccer and want to win but still have fun playing the game,” she said. “I wanted to be a part of a program that values the players as individuals and Oregon feels like a family.”

Growing up in Chapel Hill, it was always a dream of Alexandra Kimball to play soccer at North Carolina.

Consider that dream realized with her recent commitment to the powerhouse program.

“The soccer program is a highly valued one, with so many great players before me it definitely means a lot to wear the Carolina blue,” she told TopDrawerSoccer.com. “I knew if I wanted to be the best I can be I would have to train and compete with the best. With incoming girls who are top in the country... it doesn't get any more competitive.”

Obviously, being from the same town where the school is, Kimball knows what she is getting from the team. She is also confident that the university will equip her for her future, on or off the field.

“UNC is known for its academic stature, I knew that I would be safe getting a job out of college with any type of degree from UNC,” she said. “Along with the warm campus and friendly people that surrounds Chapel Hill.”

A positive interaction with head coach Anson Dorrance and assistant Bill Palladino was icing on the cake.

“Anson and Dino were very welcoming and meeting another recruit from my class (Annie Kingman) was nice and we got along perfectly,” she said.

The draw of playing nearby helped Jessica Udovich make her commitment to Washington(w).

“It's a great university with a solid soccer program and the location is close to home,” she told TopDrawerSoccer.com. “I enjoy having the support from my family. I also believe this is the right program to help me get to the next level.”

There was plenty more about the school that she liked as well, not just the proximity to family.

“UW has a great medical program and beautiful campus with a lot of history,” she said.”

Forward Sh'Sh'Nia Gordon (D'Feeters) committed to West Virginia for the class of 2015.

Goalkeeper Zaire Overton (Westside Breaksers SC) committed to USC for the class of 2013.

Forward Karli White (Crossfire Premier) committed to Arkansas for the class of 2015.

Midfielder Taylor Chaffetz (Utah Avalanche) committed to Kansas for the class of 2015.

Forward Kelcie Hedge (Washington Premier FC) committed to Washington(w) for the class of 2015.

Defender Paige Bergman (FC Bucks) committed to Saint Joseph's for the class of 2015.

Forward Dominique Mazero (Dallas Texans) committed to Rice for the class of 2015.

Midfielder Jamie Jeffrey (Dallas Texans) committed to Tulsa for the class of 2015.