Bridget Callahan was originally committed to VCU under Tiffany Roberts Sahaydak’s tenure. But when the coach headed south to UCF, Callahan followed and switched her commitment. 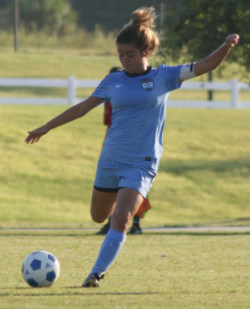 “UCF was the total package from a championship caliber soccer program as well as being very strong academically,” Callahan told TopDrawerSoccer.com. “I love the coaching staff and the school is beautiful. It's close to home so it gives my brothers the opportunity to come watch me play. I just feel at home when I'm there.”

So instead of a future in central Virginia, Callahan’s collegiate career takes her to central Florida, much closer to her hometown in the south of Florida.

Along with Roberts Sahaydak’s presence, she found plenty to like about the soccer team.

“The program, coaching staff, and facilities are amongst the best in the country. The team has had much success in the past few years being ranked in the Top 25 in the nation on numerous occasions,” she said. “They are a possessive team which I love and never stop competing. The coaching staff has made me feel so comfortable.

“I'm looking forward to growing as a player and person under Coach Tiff and Tim who were very successful players when they played. They have made me feel so important and apart of their family. Also, many people come to the games so I'm looking forward to playing in front of a big crowd. They play in a new, very competitive conference, the American Athletic Conference, against some of the best teams in the country. The team seems very close knit and that's really important to me.”

Academically, Callahan still isn’t sure what she’d like to pursue, and the school’s vast array of options in the classroom was another positive.

“It's a gorgeous school with amazing facilities,” she said. “There is so much opportunity especially being in the Orlando area. The university has a great college of education and human performance and I plan on getting a degree in something to do with athletics.”

The combination of school and sports drew Alyssa Pejic to South Alabama.

“I decided on South Alabama because I love the soccer program, the coaching staff, and the campus,” she told TopDrawerSoccer.com. “It also has my major of Meteorology.

“I liked the coaching staff and the way the team plays as a whole. I felt the team had great potential and would be able to become a competitive team in the Sunbelt Conference.”

Pejic, who also considered programs like Mississippi State, Charlotte, Southern Mississippi and the College of Charleston, was also drawn by the school’s location.

“I loved the southern-style campus,” she said. “It is one of the prettiest schools I have visited and makes me feel like home. The size of the school is exactly what I was looking for."

Midfielder Taylor Walker (Sporting Blue Valley committed to Missouri for the class of 2014.

Defender Cayla Velander (San Juan SC) committed to Wyoming for the class of 2014.

Forward Bryson Thomas (Dallas Sting) committed to North Texas for the class of 2014.