Girls Commitments: Coaching them up A player who takes pride in putting the team first, Holly Daugirda is a forward that will take her talents to the Pac-12 in 2016 after making a verbal commitment to Utah. 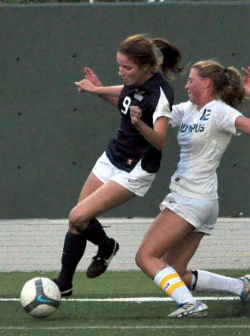 For the Utah native, a lot of her commitment came down to head coach Rich Manning.

“I really respect the coach and his staff,” Daugirda told TopDrawerSoccer.com. “I like the way he coaches the team. I feel like he takes an interest in his players and mentors them, both on and off the field. I feel like he has a real vision for the future of this team, as he develops it.”

Along with a strong connection to the coaching staff, Daugirda also jumped at the opportunity to stay close to home in order to give her family the chance to see her play.

And the coaching staff certainly wasn’t the only thing that impressed her about the soccer team.

“I was impressed by the soccer facilities, the training facilities, and all of the other programs they offer their athletes,” she said. “They have academic advisors who work with each individual student, to help them succeed as student athletes. They have a facility that is just for athletes to study, get tutoring. They have student mentors. They have athletic advisors that help the athletes eat and hydrate correctly. They have fitness trainers that are dedicated to do only soccer specific training. I also really enjoy the U's style of play. As I mentioned, I like the technical style of play and they are a very technical team.”

Daugirda was also intrigued by the athletic dorms, as they were originally used as housing for Olympic athletes back in the 2002 Winter Olympics.

The school had what she was looking for in the classroom as well.

“Academically, the University of Utah is an amazing school,” she said. “I am interested in medicine and the U’s programs are considered among the best.”

A shot-stopper who always likes to have her team’s back in net, Sara Dooley’s commitment also came down to a quality coaching staff.

“I decided to commit to Western Carolina because I absolutely love the school, and coach Chad [Miller] and Todd [Herman] are awesome,” she told TopDrawerSoccer.com. “When I was at camp, coach Chad and Todd seemed to make a special effort to make sure they got an opportunity to see everyone play, and I felt like they really wanted to help all players improve their game whether they were going to Western or not.  They are great coaches, and the team at Western was exactly the team I wanted to play on while in college.”

Dooley is also confident that playing for Western Carolina in the Southern Conference will help her improve and become a better player.

“It offers a competitive environment to play in that also will push me to grow and excel in the game, and that is exactly the kind of environment I want to be in,” she said.

Defender Jordan Knox (Sporting Blue Valley) committed to Oklahoma for the class of 2014.

Goalkeeper Scout Watson (Sporting Blue Valley) committed to Colorado for the class of 2014.

Forward Juliana Provini (Continental FC Delco) committed to Penn for the class of 2014.

Forward Chloe Maize (Tophat SC) committed to Georgia for the class of 2016.

Forward Gabrielle Moore (Kansas Rush) committed to Western Illinois for the class of 2014.