Emily committed to Columbia in September of 2014, the day after she visited the campus. A double threat in terms of positional ability, she can offer a scoring threat up front or act as a playmaking further back in the field. 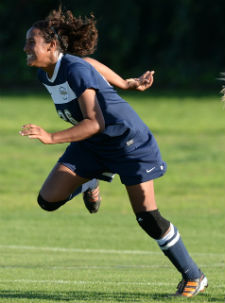 She knew right away that Columbia was the perfect place for her.

“Right when I walked on to campus, I got this instant feeling that this place could be my home,” Koe told TopDrawerSoccer.com.. “I then met the coaches and the girls who immediately made me feel like part of their family. Watching them play against Citadel, I could see myself contributing on the field. I knew right away that I wanted to commit.”

With a lofty high school GPA, Columbia offers the best balance between academics and soccer as an Ivy League School.

Coming from California, Koe is excited to experience the four seasons in New York City. Her friends have already nicknamed her “Koelumbia,” as she prepares to continue her playing career in the Big Apple.

Four players are verbally committed to join Columbia in 2016.

I am a physical, fast-paced Forward. I spend a lot of time roaming in the middle, but also run out on the wings as needed. My approach to a game is with high energy and to show how much I love the sport and my team.

Ashley Johnson brings a high energy approach to the game, and as a fast-paced and physical forward, looks to find the back of the net.

She’ll head to UC Irvine in 2017 after recently committing to join the Big West program.

“UCI obviously has a great campus and academic reputation, so the student side was appealing,” Johnson told TopDrawerSoccer.com. “Coach [Scott] Juniper has been present in a number of venues with me such as ODP and U.S. Soccer, and I have seen that he is not only a player’s coach, but that I can also learn a great deal from him.”

With a college search that led her a small handful of California schools, UC Irvine’s soccer program eventually helped her make a decision.

“The team environment and culture was a bonus to the solid coaching staff,” Johnson said. “Coach Juniper seeks out contests with the top programs in the country to challenge his players and to help build the program. The learning and the training centers are also top flight to support the program and its players.”

Away from soccer, UC Irvine had plenty to offer the California forward.

“UCI is a beautiful campus in a great and safe area,” she said. “The academic side is excellent and Coach Juniper convinced me that the school and I were a good fit outside of the soccer program itself. At UCI, the term student-athlete has meaning and that is important to me.”

Johnson is the first verbal commitment to UC Irvine’s class of 2017.

Midfielder Elliana Graham (So Cal Blues) committed to University of Chicago for the class of 2015.

Forward Sophie Sipprell (Charlotte Soccer Academy) committed to Charlotte for the class of 2016.

Defender Dionne Bailey (Michigan Jaguars FC) committed to Cincinnati for the class of 2015.

Defender Madeline Maloney (Boston Breakers Academy) committed to Middlebury for the class of 2015.