Girls Commitments: Corners of the country 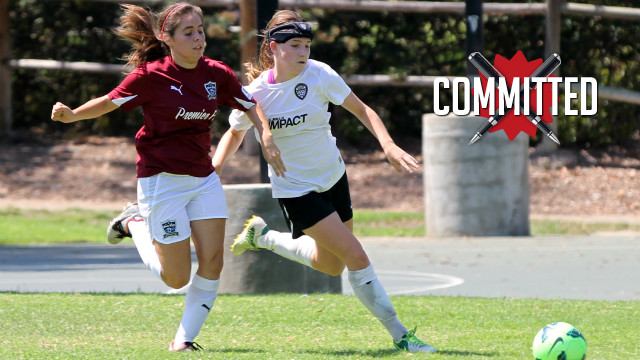 A driven outside back from Ontario, Canada, Mackenzie Stacey takes pride in her ability to play with both feet. 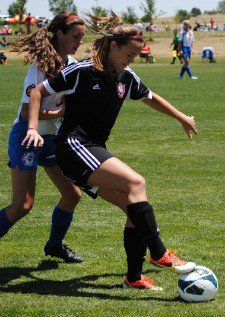 Her search for a future college home eventually led her to Louisiana Monroe, where she’s committed to begin playing this fall.

“I was drawn to ULM(w) in part due to its small campus,” Stacey told TopDrawerSoccer.com. “Having done a number of visits to large campuses, I immediately felt comfortable with ULMs size. Academically, it will be a great fit, as it has a strong science department and great academic support systems.”

Another big plus for her was head coach Roberto Mazza, an experienced and ambitious custodian with ties to Stacey’s home province.

“At the time of my visit, ULM had just appointed a new coach with a track record of success, and a solid plan to elevate the soccer program,” she said. “Even better was that he comes from my home province of Ontario.”

The prospect of living in a warmer climate wasn’t bad either.

“After a lifetime of Canadian winters, I am looking forward to sun and mild temperatures in Louisiana,” Stacey said.

For her club and high school team, Kelsey Ritter has played just about every position on the field, outside of goalkeeper.

She’s done it all: shutdown defender, midfield ball winner, goal scorer up front. She’s optimistic that will help her when she makes the transition to Towson, the local program that won her over.

“I felt comfortable with all aspects of the school,” Ritter said. “After taking other visits and attending some camps at other colleges, I knew Towson was the right fit for me in all areas.”

A game day experience was particularly helpful for her during an unofficial visit last November. Ritter had the chance to meet some of her future teammates, and she liked what she saw on the field.

“I felt like their style of play suits my game and there was a comfort level with the coaches and players,” she said. “I feel like I can help them in their goal of winning a conference championship, and playing in the NCAA tournament.”

Being a Maryland native, like other high schoolers, she wanted to go farther away from home than somewhere like Towson. But the recruiting process eventually changed her mind.

“Sometimes you have to visit schools farther away to realize what you want is closer than you think,” she said. “Towson has all I want in terms of academics, as well as a comfortable feel with the campus and it is less than an hour from my hometown. Baltimore is a great place with an amazing soccer history that has produced a lot of great players.”

A local product of Gwinnett Soccer Association, Halle Huff first heard about how much Georgia Southern has grown from her parents. When she saw that for herself, it piqued her interest.

Finally, after getting to know the coaching staff, she feel like her mind had been made up.

“After meeting Coaches Dunleavy, Farrell and Lewis several times, the excitement built as I focused on what it would be like in their program as a person and player,” Huff told TopDrawerSoccer.com. “I knew that GS was my place and I honestly could not be more excited to play there.”

Her interaction with the coaching staff was the obvious plus, as she felt comfortable with the way they were clear, direct and honest with her.

Away from soccer, there was plenty to like as well.

“The campus is beautiful and all the sports' amenities are fantastic,” she said. “I'm looking forward to zeroing in on my major, possibly Exercise Science.”

Looking for the right college fit, Gwennie Gardiner, a midfielder who likes playing through the middle found what she was looking for at this DIII program.

“I knew both that I wanted to play soccer in college and that high level academics were a strong priority for me,” she told TopDrawerSoccer.com. “Oberlin was a good mix of that. After being sought after by similar institutions, I went on my visit in the fall and fell in love. The girls were incredible, the classes were small and rigorous, and everything started to fall in to place.”

Last year was an up-and-down campaign for Oberlin, but instead of seeing that as a negative factor, Gardiner was swayed by the idea of helping to build something special.

“I loved the opportunity to be a part of an emerging program,” she said. “Coach [Dan] Palmer seemed so enthusiastic and had such ambition for the seasons ahead. The girls were so welcoming and motivated both on and off the field. I knew I wanted to be a part of it.”

Midfielder Mia Gyau (Bethesda SC) committed to Duke for the class of 2016.

Defender Zoe Barrie (De Anza Force) committed to Arizona for the class of 2016.

Midfielder Meghan Haslett (World Class FC) committed to Pace for the class of 2014.

Defender Taylor Palmer (Match Fit Academy) committed to Vermont for the class of 2014.

Goalkeeper Brianna Foster (Match Fit Academy) committed to Duquesne for the class of 2014.