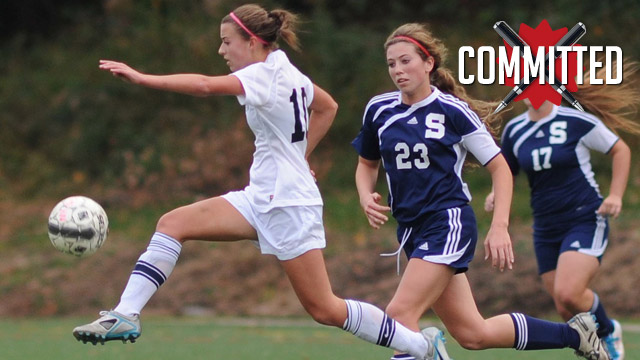 For Lindsay Knutson, the college search basically revolved around the Ivy League. 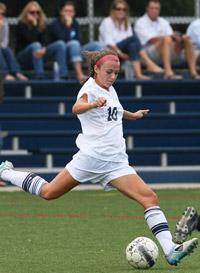 The ECNL standout for Connecticut FC had interest in a slew of Ivy programs, but a conversation with the Dartmouth head coach eventually swayed her to commit to the quickly improving Big Green.

“When I first sat down with Coach Theresa Wagner-Romagnolo last summer, she had just finished her first season as head coach at Dartmouth,” Knutson explained. “I was impressed to learn that she had been the Assistant Coach at Stanford, which is such a soccer powerhouse, and had played soccer professionally. She took pains to explain why the season had proved disappointing and what she planned to do to turn things around. Then I watched as she did exactly that over the course of this past season.

“Her team wound up finishing second in the Ivy League, losing only to Princeton, the league winner, and they broke into the top 30 nationwide. This year was the first season she had her own handpicked recruits playing, and they're a very impressive group of girls, including the Ivy Rookie of the Year.  These are the girls I'll be playing with, and that's extremely exciting for me.”

Along with the impressive soccer program, Dartmouth’s prestigious academic reputation precedes itself. But along with that, Knutson liked what else the university had to offer.

“What really set Dartmouth apart, in my mind, was that it seemed to be the most sports-oriented,” she said. “This is hugely appealing to me, as I'm crazy about all sports, not just soccer. I also find their unique year-round quarter approach to the academic school year to be very intriguing as it offers a tremendous amount of flexibility for schoolwork, study abroad programs and internships.”

The recruiting process came as something of a shock for Angela Boyle.

After seeing her sister commit to Elon(w) as a junior, Boyle didn’t think she would have to make a decision her sophomore year about where to play in school.

But the promising center back soon had to make a decision when Oklahoma came knocking recently, and the big defender decided to jump at the opportunity earlier than she thought she would have to.

“[My family and I] felt that OU was as good a situation as any other for me and we thought that an early commitment was not a problem,” she told TopDrawerSoccer.com. “I’m glad to be a Sooner, and look forward to a great college experience.”

Along with the lure of a prominent school and soccer program, Boyle’s teammate and friend Kylie Escobedo is also going to Oklahoma, another big lure.

The coach staff sealed the deal, of course, as Boyle developed a good rapport with the group.

“Coaches [Matt] Potter and [Graeme] Abel are very young, enthusiastic coaches who seem very dedicated to soccer,” she said. “I know some girls who played for them at Washington State who speak highly of them and had success with them there. The fact that I can be a part of the program that they will surely grow to a national contender excites me very much.”