Sometimes, one of the first schools a player visits ends up being their ultimate destination.

That was the case for Emily Coudret and Dayton.

“The University of Dayton caught my eye from the very beginning of my college search,” she told TopDrawerSoccer.com. “My goal was to play at the highest level, while also getting a great education. I attended a prospect camp at UD as a freshman in high school, and I was able to meet the coaches and some of the players.  Over the past 3 years, I’ve gotten to know Coach [Mike] Tucker and Coach [Tiffany] Hansen even better, and I’m familiar with their coaching style. I’ve been to a lot of their games, and I love the competitive, winning atmosphere.” 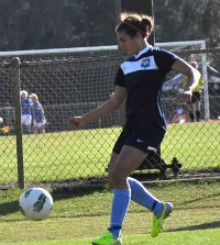 The soccer program wasn’t the only thing Coudret liked about the school, as she saw plenty of other positives about its location and backdrop.

“It’s a perfect size school for me, and the campus is beautiful,” she explained. “The soccer field is amazing too. Everybody that I have met that is a student there has been so nice, and they all tell me what a great place UD is. It really is a community, and I can’t wait to be a part of it. I’m really proud to be a Flyer.”

Soccer is a big reason every student-athlete makes a commitment, but a lot of players want to make sure the academics get a strong endorsement as well.

And that was what helped draw Marisa Knott to Northern Illinois.

“I committed to NIU because I liked how they stressed both athletic and academic success along with community involvement,” she told TopDrawerSoccer.com. “I also appreciated the time they spent ensuring that NIU was right for me and met my future career goals.”

That well-rounded approach was also reflected by head coach John Ross and the rest of the coaching staff.

“The coaches of the NIU soccer program were both welcoming and personable, which gave the program a family-like atmosphere,” Knott said. “Not only did they stress their desire to win, but they emphasized obtaining a strong work ethic, teamwork, and determination – all of which leads to a successful season.”

There’s no secret that Dayton has made impressive strides on the field of late, becoming one of the most consistent mid-major programs in women’s soccer.

And that is helping bring in more recruits, including Kathleen Golterman from the St. Louis area.

“Dayton’s soccer program is a very competitive one and will challenge me to be the best player I possibly can,” she told TopDrawerSoccer.com. “I like the style of soccer at Dayton because it is one that focuses on possessing the ball but being able to attack and score goals. Dayton also has a great academic program that will allow me to be successful in the major of my choice.”

Like her future teammate Emily Coudret, it wasn’t just about the soccer, as the school’s scenery was a massive draw as well.

“Dayton’s campus is beautiful, and I love the aspect of the neighborhood-like housing,” Golterman said. “Dayton has a really good academic program as well, and I know that whatever major I choose, Dayton will give me the right tools I will need to be successful.”

Midfielder Gabrielle Davis (New Jersey Wildcats) committed to Wagner for the class of 2013.

Goalkeeper Allison Leone (Tophat SC) committed to Western Kentucky for the class of 2014.

Midfielder Megan Koenig (St. Croix SC) committed to Minnesota for the class of 2014.

Defender Blaine Cathey (Challenge SC) committed to UAB for the class of 2014.

Forward Madeline Walsh (Eclipse SC) committed to Lehigh for the class of 2013.

Defender Nicole Niro (Eclipse SC) committed to Auburn for the class of 2014.