A creative force on the ball, Ella Stevens found what she was looking for in a college fit at Duke. 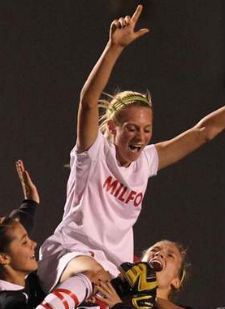 “I committed to Duke because of the strong soccer program and the excellent academics,” she told TopDrawerSoccer.com. “The coaching staff is amazing.  Coach Robbie [Church] was extremely instrumental in my decision. From the time I first walked on campus, I felt a family atmosphere.”

Stevens was in and out of U.S. U17 WNT camps last year, and will look to make her mark on the ACC. Along with the coaching staff, the team’s level of ambition drew her to the program.

“I love their commitment to excellence and drive to compete for a national championship each year,” she said. “I feel their program will help me reach my full potential as a student athlete.”

Away from soccer, the location and classroom opportunities were too good to turn down.

“The campus is beautiful and the academic standards are world class,” Stevens said. “I am very excited to be part of the Duke family.”

It took a long time for Tara Claus to find the right fit, but after a lengthy search and numerous visits, she reached a goal of hers with her commitment to Eastern Kentucky.

“My dream has always been to play D1 college soccer,” she told TopDrawerSoccer.com. “My club coaches at Ohio Elite are the best and have prepared me for what is next. Playing in the ECNL has been huge and I have become a much better player since coming to Ohio Elite at U13.”

It wasn’t a decision she made on her own, as Claus worked extensively with her parents before finally landing on what she felt was the right fit.

A product of the IMG Soccer Academy, midfielder Michaella Krebser takes pride in her work ethic and never-say-die attitude on the field.

When it came to her college decisions, there was a slew of reasons that drew her to Sun Belt Conference program Louisiana Monroe.

“I committed to ULM because I really enjoyed the atmosphere of the school itself and the team,” she said. “I believe it is a great fit for me as a student and player.”

Also drawing her in was the atmosphere surrounding the current team.

“I liked the fun, competitiveness of all the girls; they all seemed to get along with one another,” Krebser said. “Also, I liked the positive coaching and I feel that I could learn a lot and become a better player.”

Midfielder Rasha Roberts (Florida Kraze) committed to Oklahoma for the class of 2014.

Midfielder Zoe Morse (Michigan Hawks) committed to Virginia for the class of 2016.

Goalkeeper Evangeline Soucie (PDA) committed to Kentucky for the class of 2016.

Defender Haylee Cacciacarne (La Roca Premier) committed to Utah for the class of 2016.

Midfielder Jaylen Hinckley (Challenge SC) committed to Utah State for the class of 2015.