The opportunity to play soccer at a high level is a dream come true for Madeline McCracken, and with her verbal commitment to Boston College, she’ll live that out in a few years.

The 2015 attacker didn’t need a lot of convincing to join the vaunted Eagles program.

“I chose Boston College because of the amazing academics and the outstanding women's soccer program,” McCracken told TopDrawerSoccer.com. “They are consistently a top 25 program every year and I want to be a part of their success. Also, they play the same style that I like, fast and quick touches on the ball.”

McCracken also seemed excited about how the environment there will help her become a better player on the field. 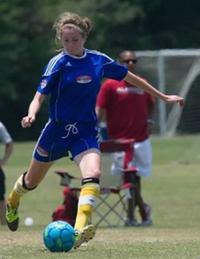 “I know at Boston College, the coaching staff will each and every day show me various paths to greatness,” she said. “The staff is hard working and energetic and I know that they will get the most out of me every day for four years.”

A commanding center back, Amy Falkin knew that Main was the right school for her, and it didn’t seem like a difficult process.

“Maine has always been my dream school, so once I got an offer, the choice was simple,” she told TopDrawerSoccer.com. “I decided to commit to Maine because I wanted to play soccer at a competitive Division I level at a school that I love.”

While Maine doesn’t necessarily strike a chord amongst national circles, Falkin thinks the team will continue its upward trend.

“The soccer program has really improved tremendously over the past few years, which was the main thing that stood out to me,” she said. “The coaching staff as well as the hard work rate of the team made me really interested in playing at UMaine.”

“The campus of Maine is absolutely gorgeous with a lot of nature and running trails surrounding it,” Falkin said. “I like the fact that I will fit in well, academically, with the rest of the school while being able to pursue a medical career. The size of the school is also ideal for me: not too big and not too small.”

It didn’t take long for Jalana Ellis to sense an inkling she could end up swapping Ontario for the Deep South.

“After visiting many schools prior to visiting JSU, I knew this would be the school for me as it has much to offer with the high academic standards,” she told TopDrawerSoccer.com. “Coach Dean Joseph is a man of excellence and drive in which I am use to as I have been coached under many great coaches. He is also a very welcoming, pleasant Coach that made me feel at home when I visited the campus.”

The top scorer on her Erin Mills SC squad, Ellis is looking forward to attending JSU and thinks that the adjustment to her new team won’t be too difficult this fall.

“I am excited about the program as it suits the style of soccer I have been playing,” she said. “The goalie coach gave me some pointers that inspired me to go after my dreams against all odds. Her discussion was memorable.”

Defender Kira Flaherty (Albertson SC) committed to American for the class of 2014.

Defender Tierney McClenahan (MVLA) committed to UC Santa Barbara for the class of 2015.