A physical goalkeeper who relishes one-on-one challenges, Drew Williams found enough to like about ECU that convinced her to swap coasts and head east to the North Carolina institution. 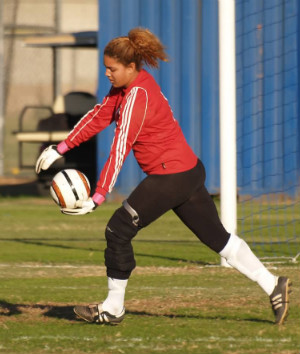 “I decided to commit to ECU because I absolutely love everything about the school,” Williams told TopDrawerSoccer.com. “When I took my official the coaches were great as were the girls. I asked many people for pros and cons of the school and nobody could come up with a con to stand against their long list of pros.

“When I met the women's advisor, she told me that there is not only a family feeling throughout the athletics but throughout the campus as a whole and it was definitely easy to notice. I couldn't be happier with my decision because the school is truly amazing.”

She also quickly became enamored with the soccer program.

“I love the team, including the coaches,” she explained. “Everyone was so extremely welcoming and they all seem so close to one another. I know I'm going to get great training from coach [Rob] Donnenwirth and coach [Allison] Lipsher and I can't wait to start working with them. The athletic facilities, especially the soccer stadium, are all amazing.”

An attacking midfielder who enjoys having the ball at her feet, finding a program that plays a possession style was a big factor in Mariela Juarez’s college search.

“After watching Houston play when they came to California I knew I could add something valuable to the program,” she told TopDrawerSoccer.com.

It was more than the team’s style that drew her to make the commitment, of course. A trip to Texas reinforced her interest in the school.

“I felt very comfortable after my first visit to the University of Houston,” she said. “I loved the college atmosphere as I walked through the campus. Everyone was so friendly and welcoming, which will make it easier to move so far away from home.

Juarez, who cited the school’s medical program as another plus, felt at east with the team’s coaches.

“I was very comfortable with the coaching staff, I felt as if they cared about not only my future in soccer but also my future with my education,” she said. “They offered extra support through counseling, personal tutoring, and mandatory study hours, which will help me manage my time.”

Defender Madeline Marotta (Sereno SC) committed to TCU for the class of 2014.

Midfielder Olivia Bagby (FC Dallas) committed to North Texas for the class of 2015.

Forward Rachel Wheeler (Crossfire Premier SC) committed to Washington for the class of 2014.

Defender Zoe McCormick (Internationals SC) committed to Cornell for the class of 2015.

Forward Olivia Bohlman (Tennessee SC) committed to UT Martin for the class of 2014.