Girls Commitments: Finding the best at BC Every top girls club player, at one point or another, dreams of playing at an ACC program at the Division I level. 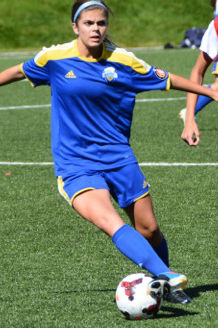 Emily Langenderfer jumped at the chance to commit to Boston College, with academics playing a pivotal role in her decision.

“I loved everything about BC,” she told TopDrawerSoccer.com. “There are two strong academic programs that I'm interested in pursuing, business and nursing. The academics needed to be as strong as the soccer program and BC is very strong in both. BC has a great sense of community on and off the field and Boston is a great city.”

A technical midfielder who aims to make an impact for both her ECNL side and high school team, Langenderfer was in particular impressed by the BC coaching staff.

“I like the direction that the program is headed and I believe that I am that impact player that will make a big difference in achieving the goals of the program,” Langenderfer said. “Alison Foley will be an amazing mentor for me. Her passion for soccer and commitment to her player's success on and off the field was the best I came across.”

The Colorado native is BC’s third verbal commitment for 2016.

Taylor Lambouris’ desire to play for Loyola-Chicago leaned heavily on the university’s location.

“I just love the city of Chicago and the Loyola campus,” Lambouris told TopDrawerSoccer.com. “The university is about five hours away from my home in Michigan so I can ‘flex my independence’ but still have my family and friends visit and watch me and our team play.”

A defender who enjoys playing a mix of possession and direct soccer, that was one of many things she liked about the program.

“The team likes to train hard, which was something else that drew me in,” she said. “The coaching staff is excellent. The Loyola soccer field has a great, urban feel and the university recently added a state-of-the-art athletic training facility on campus.”

Lambouris is the second verbal commitment to Loyola-Chicago for 2015.

Since her sophomore year of high school, Jazmin Gonzalez has been on the hunt for the right college fit, visiting multiple universities both big and small.

At a stopover at Charleston Southern, it didn’t take her long to realize that this was the place for her.

“The minute I made a visit at Charleston Southern University, I felt in my heart that this was the right fit for me,” she told TopDrawerSoccer.com. “It's a Christian faith university with a great educational background and reputation. I spent some time researching the university’s reputation and educational programs and truly knew it was the program I wanted to be part of.”

A positive interaction with the coaching staff sealed the deal, as the Philadelphia native is looking forward to living and playing in a warmer climate.

“I really like coach Eric [Terrill] and coach Christi [Rostin],” Gonzalez said. “I felt that the coaches have the passion and desire to win a Big South Championship. The coaches took the time to answer all of the questions that my parents asked. As I walked around the campus, I felt very safe and comfortable. I feel that my skills and determination will lead Charleston Southern University to the NCAA tournament and a Big South Conference championship.”

Midfielder Alyssa Hill (Maryland United FC) committed to Liberty for the class of 2015.

Forward Caitlin Fryer (Albertson SC) committed to Miami (FL) for the class of 2015.

Forward Miranda Nild (Mustang SC) committed to California for the class of 2015.