Girls Commitments: From Canada to the WVU West Virginia head coach Nikki Izzo-Brown has a nice recruiting pipeline that runs from north of the border to Morgantown. 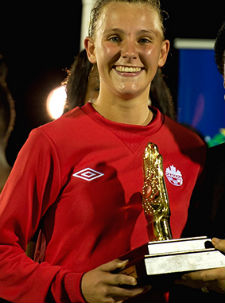 Izzo-Brown’s latest addition is cut from a similar mold, as Canadian U17 goalkeeper Rylee Foster verballed to join in 2016.

“West Virginia was the total package,” Foster told TopDrawerSoccer.com. “I want to study Sports Psychology, and WVU has one of the best Sports Psych programs in the nation. WVU is a perennial top 25 soccer program, that creates success on and off the field, and the coaching staff is amazing. Also Morgantown felt like home to me, it was a great feeling when I was on campus for my visit.”

A goalkeeper who backstopped Canada at last fall’s CONCACAF qualifying – she earned the Golden Gloves award – and also started a couple of games at this spring’s U17 World Cup, Foster is a modern day ‘keeper. She’s swift off her line, plays the ball out of the back and is comfortable on the ball.

Her experience with Canada has dramatically improved her abilities.

“The Canadian national team has helped me take my game to the next level,” she said. “Being able to play in the U17 CONCACAF tournament, and the U17 World Cup in Costa Rica were not only great soccer experiences but great life experiences, a true honor and privilege to represent my country. At the National level all the players are great, but learning how to be away from home for long periods of time and managing yourself accordingly really makes a difference. You have to grow up and mature quickly, and balance all the other things going on in life such as schoolwork.”

Foster is the first verbal commitment to West Virginia for the class of 2016.

A speedy midfielder who likes to create chances after beating players one-on-one, Lauren Dao sees promise in Seton Hall – one of many reasons she elected to verbally commit there.

“I chose Seton Hall because of the new coaching staff, they really seem to have the program going in a positive direction,” Dao told TopDrawerSoccer.com. “Also because it is in the Big East and not too far from home.”

Dao also took a liking to the tight-knit team and high level of competition of practices.

Away from the game, she enjoyed the school’s proximity to New York City, its status as a medium-sized Catholic university and the academics.

Midfielder Hannah Schramka (Bavarian SC) committed to Xavier for the class of 2014.

Goalkeeper Erin Seppi (FC Bucks) committed to Maryland for the class of 2016.