A tenacious and technical midfielder and captain of her extremely talented Surf U15 ECNL side, Ana Gil zeroed in on her ideal college by first looking on the academic side. 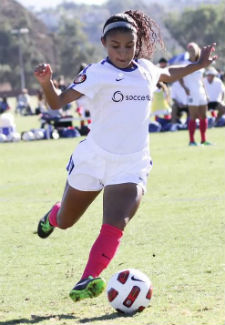 “Cal Berkeley is considered the best public university in the country,” Gil told TopDrawerSoccer.com. “I want to be an attorney and this learning institution has the academic programs to assist me in achieving my goal. Cal Berkeley’s law school is prestigious and ranked one of the highest programs in the country. In addition, Cal is part of the PAC 12 conference and their sports programs face the stiffest competition in the country. I love the fact that I will be part of Cal’s women’s soccer program facing arguably the best competition in the United States.”

Another side to her decision came due to the makeup of the school’s coaching staff. Her old Surf coach Chris Lemay is now the Associate Head coach at Cal, and she was incredibly impressed by the way the coaching staff runs things.

“Head Coach Neil McGuire and his coaching staff instruct/coach the style of soccer that I’m accustomed to playing at San Diego Surf,” Gil said. “I watched a Cal women’s soccer practice and game, and honestly loved the style of soccer being played. Having played for associate head coach Chris Lemay at San Diego Surf for two years, I understand what is expected of his players. The Cal coaching staff's philosophy fits perfectly with my style of soccer. I am looking forward to being a great asset to this Cal women's soccer program.”

Gil also liked what Berkeley had to offer as far as location goes.

“The Cal campus is absolutely beautiful. The nature surrounding the campus is breath taking and I honestly can’t ask for anything better. The location, academics facilities, athletic departments, the rich history, friendly school atmosphere and women’s soccer program is what left a great impression as I left the campus.”

Three players are committed to California for the class of 2016.

Up front, Asia Brisco isn’t scared to mix it up. Her aerial ability as a forward for her Crossfire Premier side is a major asset in battling other defenders in the ECNL.

She also didn’t have to leave the Pacific Northwest for her college home.

“I committed to Washington because I saw myself reaching many of the goals I set starting there,” she told TopDrawerSoccer.com. “Getting to college is an accomplishment in itself and I'm happy to make my family happy with my decision.”

Considering she’s from the area, Brisco is familiar with the team’s play on the field, which was another factor in her decision.

“The style of soccer they have I've been watching for years and it's always been similar to the way I play,” Brisco said. “Coach Leslie is an amazing coach that has led people on do to great things. Knowing I'm going to be under her wing [during] my college soccer career is very exciting.”

Brisco is one of four players committed to Washington for its 2016 recruiting class.

Goalkeeper Gabriella Tassano (Pleasanton Rage) committed to Dominican University for the class of 2015.

Midfielder Sarah Clayton (So Cal Blues) committed to McNeese State for the class of 2015.

Midfielder Samantha Elster (Chicago Fire Juniors) committed to Indiana for the class of 2016.

Midfielder Molly Dwyer (FC Alliance) committed to Furman for the class of 2014.