The Florida Gators took a big bite out of the talented pool of players from Dallas with a recent 2016 verbal commitment.

Dallas Texans star midfielder Hope Hyde gave her verbal commitment to the SEC powerhouse back in May. 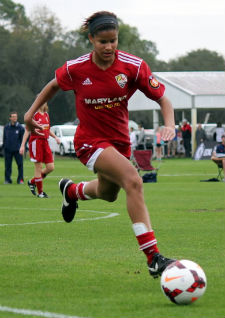 “I committed to the University of Florida, and am very excited about the opportunity to be a part of the Florida soccer program,” Hyde told TopDrawerSoccer. “Florida's tradition of excellence in numerous sports, and strong athletic and academic support, is evident throughout the campus and community.”

The quality of the Florida program and the coaching staff played a key role in helping Hyde decide on the Gators.

“Head coach Becky Burleigh’s teams have won 13 SEC championships and regularly play in the NCAA tournament,” Hyde said. “Coach Becky [Burleigh] is a dynamic and positive person, which immediately resonated with me. I was impressed with her passion to build team unity, and identify ways to help each player achieve their goals.”

The talented midfielder also cited Florida’s style of play, as the Gators tend to be a more attack-minded side. Florida averaged 2.17 goals per game last season, which was 26th best in Division I.

“Because I am an attacker that plays multiple positions, I knew Florida would be a good fit for me after discussing their offensive style with assistant coach Alan Kirkup,” Hyde said. “Plus, Florida’s reputation for developing youth and national team players was another factor in my decision because it demonstrates coach Burleigh’s dedication to help her players reach all of their potential.”

Potential is a big part of the puzzle for any recruit and Hyde has shown plenty of it in a talented pool of prospects from Texas.

“I have been blessed to play with talented ECNL and high school teammates, and compete for national and state championships, respectively,” Hyde said. “I knew from these experiences that I wanted to continue playing collegiately for a high caliber soccer program.”

Hyde took eight informal visits to explore her options and said that she eventually narrowed the search to Florida and South Carolina.

Danielle Van Liere and Hyde make up the current crop of known recruits for the Florida 2016 recruiting class.

Head coach Tim Santoro and the rest of his staff are hard at work trying to launch NC State into the upper echelons of the ACC.

And it’s an effort that recruits are taking notice of, if the addition of Kia Rankin as a verbal commitment for the class of 2016 is any indication.

“I decided to commit to NC State because it is a great school with great soccer coaches who are building a great soccer program,” Rankin told TopDrawerSoccer.com. “The environment at NC State is designed to encourage excellence in the classroom as well as on the field. The facilities are really great. The library is one of the best I have seen. It is a place that students actually like to go to. Also the new athletic director has really put a significant amount of resources into the athletic facilities. Everything is first class.”

Santoro’s ambitions for the program played a significant role in attracting Rankin’s commitment. She scored 13 goals in 19 games for her Maryland United side during the last ECNL season.

“I felt very comfortable with coach Santoro and coach [Mike] Barroqueiro and I really like their vision for the soccer program,” she said. “They are building a culture of working hard to get good results. They believe in having the proper character in all areas: academic, athletic and social. I like that they are concerned with all aspects of their players' college experience. They are really excited about the incoming classes and the future of the program and I am excited to be a part of that growth."

Rankin also said that she liked the campus as soon as she set foot on it in Raleigh.

“Last fall, my club team was playing in a showcase and we played a couple of our games on NC State's campus,” she explained. “I remember thinking to myself, ‘I can see myself going here.’ That was even before coach Santoro contacted my club coach and invited me for a visit! Also, with NC State being in Raleigh there are so many opportunities to interact with the surrounding business and medical communities. That presents great internship and post-graduation options.”

The striker is the first reported verbal commitment to NC State’s 2016 recruiting class.

Other commitments:
Forward Sally Sandoval (Oakwood SC) committed to Dartmouth for the class of 2015.

Midfielder Delaney Borror (CASL) committed to Columbus State for the class of 2015.

Midfielder Casey Richards (NJ Crush FC) committed to Georgetown for the class of 2016.

Midfielder Alyssa Kaiser (Real Colorado) committed to Tulsa for the class of 2016.