Girls Commitments: Goals for the future 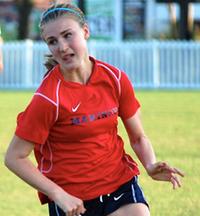 The allure of the Ivy League is pretty obvious with the historic institutions and world-renowned academics. However, the athletic programs at some of those fine institutions have also made a claim for why student-athletes should consider the Ivy League.

It was the success of the Tigers’ soccer program that drew Northern California forward Mikaela Symanovich to New Jersey.

“I have been very focused on the Ivy League because of the strong academics, but I was also wowed by Princeton’s soccer program,” Symanovich told TopDrawerSoccer.com. “Princeton finished last year undefeated in the league, led by senior Jen Hoy, who was called up to the U.S. Women’s National Team pool. Hoy has also been tapped to play for the Chicago Red Stars. I’m very inspired by her example.”

Both of her parents are from the opposite coast, so the big move away from home did not scare her.

“My parents are from the East Coast originally and a lot of my family still live there,” she said. “Attending college on the East Coast will be a new and exciting experience for me.”

Although, Symanovich has a considerable resume that includes starts and regional appearances at the Olympic Development Program level, she, admittedly, did not get into the recruiting process until the latter stages.

“I was a little bit of a latecomer to the recruiting process at Princeton, but coaches Julie Shackford and Esmeralda Negron have been very welcoming,” she said. “Coach Shackford has an amazing record at Princeton, which includes eight NCAA Tournament appearances. I also love the fact that coach Negron holds the Princeton record for most goals in a single season. Her specialty is working with forwards, which is very exciting to me.”

The Tigers are also hopeful about continuing this recent run of success and the incoming recruits are well aware of the coaching staff’s goals.

“Both coaches talked about their ambition to play at a very high level and to build on last year's achievement when Princeton made it to the second round of the NCAA playoffs,” she said.

Symanovich is the first commit for the 2014 class for Princeton.

The 16-year-old notched four goals and five assists in nine games with SLSG in the ECNL this past season. The club success came on the heels of a 30-goal season with her Pattonville High School team. Her efforts earned her the Suburban North Conference Player of the Year award, as a sophomore.

“At the beginning of the college [search] process, I was looking close to home so schools like Missouri and Illinois,” Carey told TopDrawerSoccer.com. “When I switched teams and began to play in the ECNL, I realized how many colleges were actually out there and I looked at Alabama, Florida State, Memphis and then, obviously, Baylor.”

It was in Waco, Texas that she knew she found her new home.

“I felt that Baylor was the right place for me immediately,” Carey said. “It’s far away enough from home so that it forces me to become independent and grow as a person, but also close enough so that I don’t feel worlds away from my parents.”

There is a lot to love about the Baylor program – from the fiery head coach Marci Jobson to the rising success of the squad on the field. Carey found just as many reasons to commit to Baylor off the field as well.

“I was looking for a school that valued academics as much as they valued athletics and with Baylor they had one of the highest (if not the highest) team GPA in the country,” she said. “Along with that, the size of the campus was another key factor in my decision making process. Baylor was big, but not huge and I liked that a lot.”

Just as Baylor dreams big of College Cups and National Championships, Carey is thinking about a long future in the sport that she loves.

“The coaches and their spouses are all actively involved with the team and committed to making everyone better, not just for the purposes of winning a national championship, but also in the hopes that every soccer player that comes to Baylor has the tools to reach their full potential,” Carey said. “This was another major plus because I'm hoping that college is not the last stop for me when it comes to my soccer career, and at Baylor I feel that I will definitely grow as a player.”

Even the Baylor campus had qualities that other schools just could not compete with, in Carey’s mind.

“There are a lot of things I love about Baylor, but the biggest reason why I committed is the cafeteria is modeled after the Great Hall in Harry Potter,” Carey said.

The Quidditch brooms won’t be dropping anytime soon in Waco, but the goals will be when Carey gets on campus in 2015.

Some people are destined for more, and Brianna Nicholas is well aware that requires some sacrifices.

“I am proud to say that I am going to be attending West Point, and that I will be serving my country after I graduate,” Nicholas told TopDrawerSoccer.com. “My college experience will be far different than the normal college athlete. I will be studying, playing soccer, while also learning how to be the best soldier and leader I can be.”

Through her play in the ECNL with Pleasanton Rage, Nicholas drew interest from a number of colleges, which she called an educational process.

“The college selection process has been a time of tremendous growth and learning for me,” Nicholas said. “Playing with the Pleasanton Rage ECNL team, I have been lucky to play in an environment that exposes me to many different colleges and coaches.”

When talking about her commitment, the phrases that typically dot a commitment story rarely come up, as Nicholas has a grand picture beyond her next five years.

“What West Point has to offer really hits home for me, and I will have the honor to serve my country, make a difference in the world, and be a part of something bigger than myself,” she said. “This opportunity is a life changing one – I get to attend a top-notch university and graduate as an enlisted officer in the United States Army.”

Reaching this point, and making this decision, could only be achieved with a support network and the future Army forward gave credit to hers.

“I am very grateful for the support of my family, coaches and teammates when making this decision, and I would like to thank them for everything they've done,” Nicholas said. “I would not be the player and person I am today without their guidance and support.”