In the game of soccer, speed can be a killer.

And that’s part of the reason Josie Jennings decided to make a commitment to Tennessee after discussing things with her future head coach Brian Pensky, who made it clear how her speed would become an asset.

“The decision to commit to Tennessee seemed stressful at first, but when I got on the phone with Brian everything just felt right and I knew I definitely wanted to play at Tennessee,” Jennings told TopDrawerSoccer.com. “I grew up watching Tennessee sports and cheering on the Lady Vols so a chance to become a Lady Vol was a dream come true.” 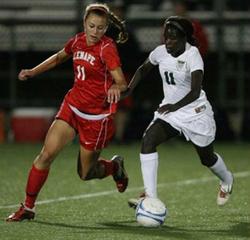 Pensky, who recently took over the women’s soccer program just over a year ago, gives Jennings confidence in a bright future, not to mention what the program has to offer on and off the field.

“The soccer program itself is going to take off under the new coaching staff. This last year was Coach Pensky's first year and they did amazing,” she said. “The entire coaching staff is very family oriented and makes me feel so welcome. Another bonus of committing to Tennessee is the access all athletes have on the campus. The facilities are absolutely amazing and the resources are astonishing.”

The lure of an in-state university was part of many things that drew Courtney Norton to commit to Rutgers.

“I chose Rutgers for many reasons, mostly because of the coaching staff, their style and commitment to success through soccer and education,” Norton told TopDrawerSoccer.com. “Since I'm from New Jersey, I am very excited to play soccer for my state at Rutgers.”

Competition is going to change for the program, with its jump to the Big Ten going through in 2014, which will also signify Norton’s first year at school. She eagerly anticipates the challenge.

“The Rutgers soccer program is a very competitive program, which I like because you will always be challenged, and need to play at your best,” she said. “I like that the coaches really emphasize being a family and making sure you are getting the most out of their program.”

A versatile player who can play as either a center back or holding midfield, Vasquez brings a diverse background to Siena’s burgeoning soccer program.

A three-sport athlete in high school, playing basketball and lacrosse to go with soccer, a sense of familiarity helped bring her to make her commitment.

“I come from a close family and I felt that Siena offered the same close family environment,” she told TopDrawerSoccer.com. “I really like the small class sizes and feel it fits me best academically. I had visited Siena several times and always felt very comfortable there.”

An aspiring physical therapist, the school’s academic reputation was encouraging, not to mention that it’s only a two-hour drive from her hometown, meaning her parents can come watch her play.

“Coach [Steve] Karbowski has a great track record of putting together winning teams every year,” Vasquez said. “Siena plays in the MAAC, which I feel is a competitive conference. I had a chance to meet the players and feel like they are a great group of girls.”

Defender Madelyn Seckman (Crossfire Premier SC) committed to Portland for the class of 2014.

Forward Emily Crichlow (Crossfire Premier SC) committed to Colgate for the class of 2014.

Midfielder Jenny Plummer (Real Colorado) committed to Seattle for the class of 2014.

Midfielder Bailey Hammond (Utah Avalanche) committed to Utah State for the class of 2014.

Jordyn Turner (East Lake Arsenal – Elite) committed to Lynn for the class of 2013.

Midfielder Mackenzie Geier committed to Northwestern State for the class of 2014.

Midfielder Gabriella Carreiro (FC Stars of Massachusetts) committed to Providence for the class of 2015.