The safe hands of Maddie Drexelius are only weeks away from signing a National Letter of Intent, and recently she made a change to her verbal commitment as she selected Indiana. 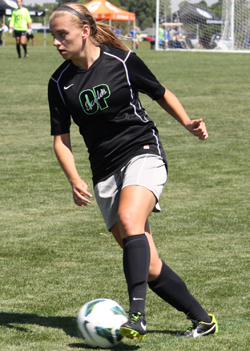 “I decided to commit to Indiana because I love everything about it,” Drexelius told TopDrawerSoccer.com. “I had been committed to a difference university but the coaching staff changed and I found that I could have broadened my horizons and aimed a bit higher.”

Indiana is fresh off an appearance in the second round of the NCAA tournament.

“All of the coaches at IU were incredible welcoming and they genuinely cared about my unique and stressful position,” Drexelius said. “I was very impressed that all three of them took the time to show me around campus and spend the whole day with my parents and me. I loved their philosophy for soccer; they had eyes for hard working, respectful players and all around good people so I knew I would love my teammates when I met them.”

While Drexelius fell for the soccer program, she realizes that it is secondary to the education.

“Of course, school comes first and IU has such a great academic history,” she said. “I event recently got my acceptance to the School of Public Health as a freshman.”

Only a few hours from her home in Cincinnati, the Bloomington campus offers a close proximity to her family as well as a place Drexelius believes she will enjoy for the years to come.

“I love the campus and Bloomington itself,” she said. “All of its little shops and restaurants are so cool and it will be a very easy and fun place to live. I’m sure I’ll never be bored; there will always be something to do.”

The location and education sold her, but she also believes the women’s soccer program is on the rise.

“One of the attributes of IU women’s soccer that I found the most appealing was that they were a growing program with a ton of potential with three new coaches,” she said. “To a lot of other players, that might look unstable or scary, but I wanted to have a part in a growing program. I thought it would be the coolest thing in the world to say, ‘I started playing at IU when we were No. 28 in the nation and when I graduated we were No. 12.’ It will be amazing to have part in something like that.”

The four-star goalkeeper from one of the best club teams in the country, Kings Hammer Academy in Ohio, is the seventh verbal commitment for the 2014 class for IU. She joins Mikayla Smith, Kayla Murphy, Taylor Coley, Nicole Zuckerman, Mykayla Brown, and Kylie Kirk. IU is looking to replace goalkeeper Shannon Flower for the 2014 season. Flower started all 23 games in 2013.

Madison Costner, the 2013 OCC-Cardinal Division Player of the Year, recently gave her verbal commitment to Central Michigan, which landed the highly regarded recruit on her second visit to the school.

“I ended up committing while I was on my second visit there, and the team already made me feel like I was a part of the family,” Costner told TopDrawerSoccer.com. “Central Michigan had everything I was looking for in a school. With an academically oriented team, great coaches and excellent facilities, I knew it was a perfect fit for me.”

Costner is a talented attacking player who has enjoyed success at every step in her career. Recently, she led her high school, Dublin Jerome, to the district final. She scored 22 goals in 18 games.

“I felt very comfortable with the whole coaching staff and loved the style of play that teach as well as their outlook on the game,” Costner said. “I know coach [Peter] McGahey and the rest of the staff will make me a better player and person.”

Defender Amanda Burke (Pride SC) has committed to Arizona for the class of 2014.

Midfielder Haley Westervelt (NC Fusion) has committed to Wake Forest for the class of 2015.