Sometimes college commitments take time, and can be a difficult process to walk through.

For Gianna Bustamante, that stigma wasn’t really the case. 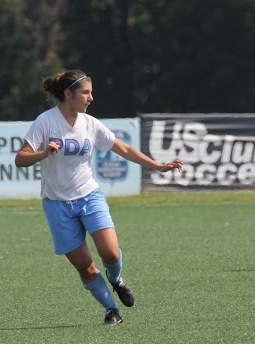 “Deciding on Dartmouth was one of the easiest decisions I’ve had to make,” she told TopDrawerSoccer.com. “As soon as I visited the campus, I knew that I wanted to be there, everything at Dartmouth was outstanding especially being a student athlete. It was a feeling that I didn’t get on any other visit. The facilities were really impressive and everyone made me feel right at home.”

School size matters to most players – whether searching for a large, sprawling state university or the smaller, private schools that bring something different to the table.

The latter was certainly on Bustamante’s mind, and fueled her final choice.

“Dartmouth is the smallest Ivy League school and it feels like such a close community,” she said. “There is a ton of school spirit and everyone seemed like they tried to support everyone.”

A new head coach also looks poised to have the program moving in the right direction, and there’s little doubting that it can benefit from a player of Bustamante’s caliber.

“Coach Theresa Romagnolo turned the program around to have an amazing winning season [last year],” Bustamante said. “I feel that with her experience she will have Dartmouth women’s soccer continuously competing for an Ivy title.”

A player who wants to do whatever it takes to win – and will play just about anywhere on the field to help her team do that – Jackie Saint John took an education-first approach to her college decision.

“I picked Seton Hall because it allowed me to continue pursuing a quality Catholic school education and they have an excellent reputation for their Biological Sciences program which is what I want to study,” she told TopDrawerSoccer.com. “Also, I liked the campus and feel Seton Hall will provide me the opportunity to excel as a student-athlete.”

That’s not to say the school’s soccer team didn’t appeal to her.

“Coach [Kazbek] Tambi made me feel like he really wanted me to come play for Seton Hall, and that I could help make a positive impact. I am excited about the awesome challenge of Big East soccer and playing against some of the best soccer programs in the country,” Saint John said. “Also, I know several of the girls on the team and they have made me feel like part of the team when I have visited the campus to watch them practice.”

While the conference may not get some of the headlines the ACC does, there’s no doubt quality abounds in the SEC.

And another program picked up a strong player, with shot-stopper Sarah Le Beau recently committing to Auburn, with good reasons in mind.

“The soccer and other athletic facilities are amazing,” she told TopDrawerSoccer.com. “It's a great college atmosphere. Another plus is that one of my teammates also committed to Auburn.”

Similarities between her club team and the Tigers also drew her attention.

“I come from my Eclipse team, which is more like a family than a team, and after my visit I got the feeling that Auburn is the same way,” she said. “I'm also excited that head coach Karen Hoppa is a former top ranked NCAA goalkeeper and she will be directly involved with my training. It will be awesome to learn from her experience.”